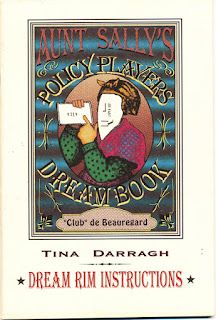 48 page chapbook brought out by Drogue Press. It's a signed copy. I got to know Ms. Darragh by attending a rare reading by two other LANGUAGE poets: Bruce Andrew and P. Inman a couple of years ago in Georgetown at Bridge Street Books. This book came out the year I first "logged on": 1999. She was talking about "cyberdreams" and Cyborg language and I had quite independently come to the notion that it wouldn't take long for there to be "Cylish" (cyber english).

While researching the SOUP anthology which may/may not ever come about, I got to meet and talk a few times with Ms. Darragh and found her to be warm and quite generous with her time and resources. Her involvement with Some of Us Press came later on in the existence of the Press and, as with all things SOUP, through Michael Lally. She helped to work on some of the last releases of the Press and still lives in the DC area. She works at Georgetown (the university) in fact. What I appreciated about this particular work is the visuality of it. She has experimented with image. While some of the poems in this collection are fairly straight forward, others are visual chaos. (stop making sense) Very much, in some way, to the work of Susan Howe who also "plays about" with collaged text and stolen lines, twisted to a point only she fully appreciates. Even Ms. Darragh's notes at the end are entitled "Annotated Bibliography" and deal exclusively with this one book and it's text. I am very much talent with it. It foreshadowing nearly 20 years of writing "in the future tense" as writing in the computer age truly is. It's thought-provoking and challenging at the same time. After all, she is considered one of the founders of LANGUAGE poetry herself for a reason!

find, and buy!
Posted by stevenallenmay at 3:39 PM

Hello, I am David Alan Binder

I love interviewing authors, drop me a line and let’s talk.

My website is located at the following place; this site is safe.

I look forward to hearing from you.

The interviews are done via email only so that makes it very simple at abring@juno.com or dalanbinder@gmail.com

Here is a sample author interview I recently posted to my website of an author whose written 80 books so far:
https://sites.google.com/site/dalanbinder/blog/0673-227post-authorandrewcroftsinterviewbydavidalanbinderabouthisbookconfessionsofaghostwriter

My blog features articles to help writers, offer a Write Coach Service, interviews of authors, and I ghostwrite.
Additionally on my site I have a tab of poetry (don't we all, LOL), and some T-shirts ideas text that combined with someone’s graphic could be awesome.

sure, let's do that