The cover is a perfect representation of a composition book. 37 page chapbook well-made by Slapering Hol Press, the imprint of the Hudson Valley Writers Center. The chapbook was the winner of their annual contest. All the same, it's glaring to see that her name was misspelled on the cover, title page, and throughout : It's Susanna, not Susan. Yet there it is: neon flashing MISTAKE MISTAKE MISTAKE.
Posted by stevenallenmay at 10:27 AM 1 comment:

8 page Lesbian story. Chapbook from a very small press. Not much known about author. Cover design handsomely done by Philip Coppola.
Posted by stevenallenmay at 3:02 PM No comments: 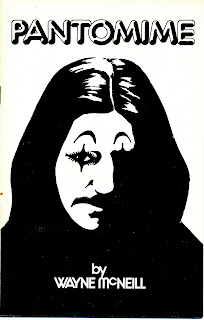 Unpaginated. Staple-bound chapbook. Nice little collection of poems, I especially like "The Reading". Rare chapbook.
Posted by stevenallenmay at 6:05 AM No comments: 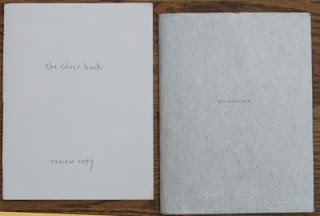 It seems a simple enough chapbook to write about : this book represents the physical manifestation of an installation by Jen Bervin entitled Mississippi, or does it? I wanted to make sure that I sound the least bit intelligent when writing about the chapbook so I contacted Ms. Bervin who told me that chapbook was a “through-line” more than a representation of another work, like, say the installation. He

This confusion or hesitation on my part comes from the timing of receiving a packet of chapbooks for reviewing from Ugly Ducking Presse at roughly the same time that Plan B Press was releasing the first chapbook by Paul Fauteux entitled “The Best Way to Drink Tea”. Fauteux’s chapbook is basically a Play Bill for a performance piece created for the poem “The Best Way to Drink Tea” by Paul Fauteux. He collaborated with his mates Ben Nicholson and Spencer Leach to create a multimedia conceptual piece (film + reading + music). Having witnessed the performance piece and published the text for it as a book, I was interested in how Ms. Bervin and Ugly Duckling Presse handled a similar situation with her The Silver Book .

I received a review copy from UDP which I found wanting. The cover was white with silver lettering, stating the title and words REVIEW COPY at the bottom. At the end of the copy were the publisher info and description of the book which included the following: “the covers are printed on the same silver paper used in bervin’s installation, the river, 230 ft. panoramic scale model of the Mississippi river composed of handsewn sequins, silver paper, and thread”. Okay, fine, I suppose I was suppose to imagine the cover and the installation while reading the text – since the text was all that was present in front of me.

But knowing that there was more I needed to see the “whole package”, the chapbook was it was released to the world. I bought a copy – silver paper cover with letter pressed title on front cover. Otherwise, it looked nearly identical to the review copy. Okay, there was one noticeable difference: the paper stock was marginally better. I now reference Ms. Bervin’s own description of the text as a “through-line”. It is not an exact representation of the installation nor was it meant to be. I have to contrast this with “The Best Way to Drink Tea” which uses a still from a film by Nicholson for the piece: the visualization of the poem, itself altered to include a teabag in water, tinted blue, added by the Creative Director of Plan B Press.

What I am curious to examine in these cases is how one medium is presented in another. How is an installation “presented” on the page, how a performance piece can be “presented” in book form. Do they capture the other art form or merely document the existence of the other? Can words alone describe images, visual arts?
Posted by stevenallenmay at 12:46 PM No comments:

During the summer of 2010, I discovered Greying Ghost Press and got a small booklet from them. I didn't just receive a booklet however. I got a packet of material. Some that made sense and some truly bizarre pieces of ephemeral. Theirs is an interesting tale, you should check it out here:

Greying Ghost Press
Posted by stevenallenmay at 5:50 AM No comments:


The chapbook proves (again) that anyone with a computer and printer can produce a chapbook. It looked better on ebay than it does in hand. Photocopy express, I'm talking! SAVE A TREE!
Posted by stevenallenmay at 2:06 PM No comments:

Staple bound chapbook. Single sided poems. Poorly designed booklet, done on the cheap. The poetry isn't bad. McCreesh is worth reading.
Posted by stevenallenmay at 5:41 AM No comments: