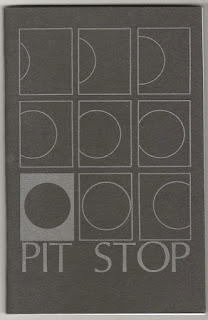 I bought a small press lot of books from a seller in California who was highlighting this book in particular, but I bought the lot anyway because of the variety of authors and presses I have never heard of before. It wasn't until it arrived and I looked through the books that I started to feel uneasy about this one - this Pit Stop left me a bit cold and it took me a few extra minutes to work through my brain why that might be and it wasn't until after I read over the publisher information that it dawned on me that I had seen "the women's press collective" before, and that it was in an unsavory context.

I quickly looked through my own blog and also typed in "Lesbian Poetry" for the name of this publisher and found that it was linked to Diana Press out of Baltimore. Ah, that's right - Diana Press out of Baltimore. Lee Lally's book that they stole. Lee Lally's book that they published without permission and never gave a dime to the original publisher, Some Of Us Press. Yes, scumbags. Yes, dirtballs. Yes, uprooting themselves from Baltimore to merge with/become the women's press collective. And that name : Pat Parker. Her name was involved with both Diana and the Oakland re-grouping.

Lee Lally passed away years ago now and my own involved with any of this was a stillborn effort on my part to publish an inclusive "Some of Us Press" anthology. While it didn't come to bear, it did enlighten me about this unethical action by Diana Press. I found it interesting that in the Lesbian Poetry Archives listing of the books published BY Diana Press that there was no mention of the pirated publication, These Days, but I just looked through my copy of the book and it clearly states that it was printed BY Diana Press. Someone is attempting to airbrush history a bit.

Since this is now the second time this incident has come across my screen, I will now have to research a bit more. I do want to get to the bottom of this sorted affair simply because whoever made this underhanded decision should not go unpunished.
Posted by stevenallenmay at 11:54 AM No comments:

Drinking the Light by Laverne Frith (2007) 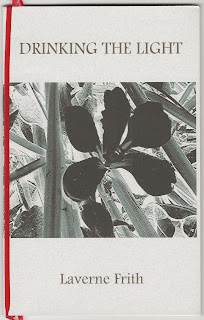 Laverne Frith is a widely published, award-winning poet and a nationally published reviewer of literary journals and magazines. Laverne is on the reviewer panel of the New York Journal of Books. He is the proprietor of Frith Press and co-editor of Ekphrasis. He is the author of a handful of chapbooks including this one. However, this one is from Finishing Line Press and I do not much like Finishing Line Press. At all.
Posted by stevenallenmay at 4:48 AM No comments:


I have been writing this blog for a number of years now (12) and admittedly several of the postings have been pretty "surface". I haven't dug into either the subject nor the work terribly hard. But then - well : I have a new query – I bought a chapbook printed in 1967 by BLACK SPARROW PRESS. Now I always thought that Black Sparrow only did full books with spines and that it started out to publish Bukowski but this chapbook undercuts that narrative. Because it’s a chapbook of James Purdy’s work and it’s a signed copy. So, if the Press WAS formed in 1966, as the history on Wikipedia states, then this is a first year project that predates Bukowski (?). The evidence I have so far found online suggests that the Press was created for Martin, the publisher, to promote Bukowski, “the new Whitman“ (Martin’s words – not mine). And here is a chapbook that is an outlier. Purdy is as underappreciated as Bukowski once was. So Black Sparrow worked with other unknown authors before striking the chord with Charles.

In later interviews Martin does seem to gloss over his own history a bit and told people what they wanted to hear or what made them cream their jeans : that in fact the Press was formed to promote Bukowski and while it’s true that he wasn’t the only successful relationship that Black Sparrow formed with authors, they also brought out work by Paul Bowles and John Fante, in our media culture narrative we associate Black Sparrow SOLELY with Bukowski. So, what am I to make with this chapbook I am holding?
Posted by stevenallenmay at 11:45 AM No comments: