Not the Same Tramp You Dumped by Andy Doyle (2011) 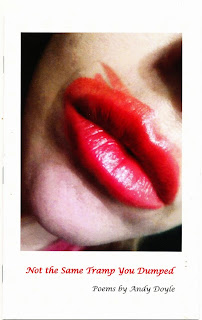 I am sad that trees were felled for this chapbook. Yuck.
Posted by stevenallenmay at 8:00 AM No comments: 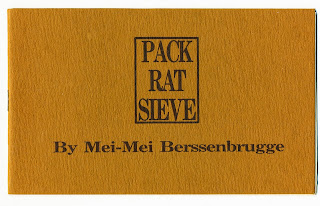 There once a small press in a city of Publishing Megatrons, and this tiny little PO Box location press brought out some stellar little bits - like this one. Mei-Mei's Wikipedia page lists the publisher of this 17 page chapbook as "Cambridge Graphic Arts".

Her work is generally associated with both the New York School and LANGUAGE poets. A shadow across both fields. The work in this chapbook had previously appeared as a special supplement for Contact II issue No. 27/28/29.
Posted by stevenallenmay at 4:03 PM No comments: 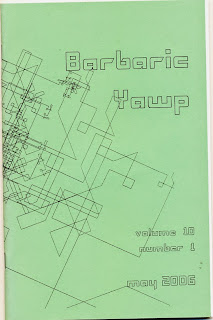 This staple-bound journal is from a Press I didn't know about before, a town I never heard of before, and publishers I was completely unfamiliar with. New York up-State. 53 pages. Published by John and Nancy Berbrich in Russell, NY. Disclaimer: one of the poets in the journal is Kenneth DiMaggio, who Plan B Press published in 2007. The interesting thing for me is that John Berbrich wrote a column in the journal called "Book Beat" and some of the books he reviewed I have also received that year. Ah, 2006. Yes. Klyd Watkins, t kilgore splake. The column provides me with names and chapbooks all new to me. Within a journal, fresh nuggets.

Great stuff. Great, great, good and so-so. The rainbow of criticism. I will focus on the new stuff. There's even a writer in here from the tiny town of Adelanto, California where I was stationed in the USAF from 1975-1977. High Desert.

No matter - more for me to learn about!
Posted by stevenallenmay at 1:49 PM No comments: 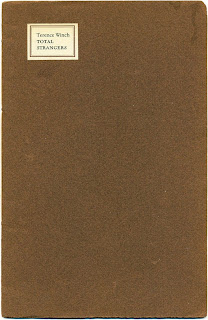 Terence Winch was one of the linchpins of Some of Us Press. He and Michael Lally, and Ed Zahniser. The story of SOUP is an important story which I will be releasing like air bubbles from the deep archives. There are several books published by them that are rarer than hen's teeth. Toothpaste Press is one of my favorite small presses. Their books are works of art. This one is a hand-sewn chapbook with illustrations by Gaylord Schanilec. This copy was numbered (259) and signed by Terence.

The writing is crisp. Here's the opening sentence of his piece Low Life : "The rock and roll jellyfish virgins, eating the socks off the commuters, licking the little black hairs off their shins, biting on their ankles till they start to smile, begin to dance." So does the language throughout; it begins to dance. Right off the page.
Posted by stevenallenmay at 10:40 AM No comments: 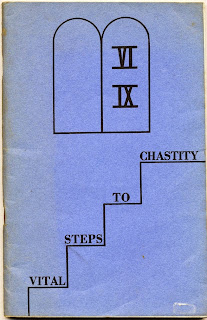 120 pages of fear and loathing by a nameless Catholic front organization that wants little Catholics to love God more than the opposite sex, that's for sure. I was not raised Catholic. This staple-bound chapbook (it's not really a chapbook at 120 pages. It's a staple-bound anti-sex tract) is a complete waste of paper. It's fear of sexuality. It's hatred of one's own body. It's remarkable in its "group-think" collectively written by women who love God more than their own bodies, as you should to, horrible child. It's designed to brain-wash the student of Catholic school against loving their own bodies and from loving the opposite sex for their own bodies. Afterall, what good will come of this? SEX ! BABIES ! ABORTIONS !

One should love God and God alone. Can't say that's a successful strategy for procreating future generations but - ah - get married to someone who God has deemed you should, even if the two people end up loathing each other. Ah, yes, the loathing again. The Catholic Church's position here is circular and not really open to independent thought. Do as you are told and don't think about it. Don't listen to that girl or boy you love. Listen to your Priest or Nun, who as we know, neither of whom has experienced sex or childbirth or any of THAT. (This is 1954, no pedophilia yet - we are to believe) I am tired about it already. This chapbook. The recycling bin awaits.

Posted by stevenallenmay at 12:14 PM No comments: 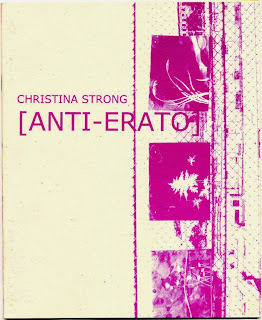 2005 - endless war - Bush Presidency. Christina Strong is not having it. She sees Ronald Reagan resumed and revived. Cult of dis/misinformation and disjointed text. Text Luther. Bald evil. Majestic surprises. Muted opposition. Limp language can not shield us from the brutality of naked Nationalism. Truth lingers in the shadow of words. Words quiver in fear of discovery. Librarians protecting their patrons from the NSA. Illegal phone call taping, a government spying on its citizens. Protecting itself from its citizens. END THIS WAR CALL slip-in with #s for the President, for Senators, a prayer against waking.

Posted by stevenallenmay at 6:33 AM No comments:

a smaller trove from Steve Lewandowski

a secondary second trove has arrived from Upstate New York. Even more to consume. Fantastic!
Posted by stevenallenmay at 5:56 AM No comments: