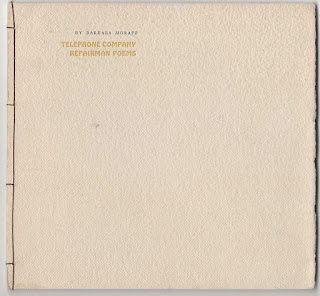 #294 of 400 printed. Signed by poet. Another incredibly handsome book by this inventive and influential press. Unpaginated. Letter pressed. Hand sewn.

One can see the effort and can imagine the frustration at the same time. Frustration in the sense that these delicate books were never going to make their way onto a bookstore shelf and be properly displayed. This book is thick enough to have a spine with text but doesn't because it was hand sewn without any spine cover at all. So beautiful, so delicate. It's not surprising that the following year, 1984, is when Toothpaste transitioned into Coffee House Press. Ironically, on the CHP website there is no mention of Toothpaste Press whatsoever. Even though they say the press started in 1972 in Iowa as a letterpress operation. Well, yes, that is true. To a point. But give credit where it was due. Coffee House began in Iowa AS Toothpaste Press. They moved to the Twin Cities and rebooted as Coffee House Press to make books with spines that could get onto book shelves across the country! At least be honest about it!!

I happen to like the efforts of Toothpaste much more than Coffee House. While I do understand who Allan Kornblum made the decision that he did, I still mourn the loss of the special quality that the chapbooks lost in the transition to perfect bound books. sigh
Posted by stevenallenmay at 2:12 PM No comments:

Stanzas in Imitations by Gina Myers (2007) 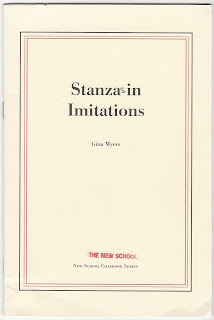 It's always a treat to read someone's earlier or earliest published work. This booklet was the 2005 competition winner for the New School chapbook contest as selected by Olena Kalytiak Davis. 21 pages. A slight "boo-boo" on cover, the "s" at the end of Stanza(s) was added in pen since it was missed in printing.
Posted by stevenallenmay at 8:18 AM No comments:

A decade ago now I posted a piece about a chapbook of Josephine Miles work that was published by Oyez Press. Sometime later a gentleman named Curtis sent me a comment about my posting, it read :

"Hawley's little bookshop moved from Albany to a place on Shattuck Avenue for a while, but Bob became very ill (the rumor was lung cancer), and he closed it soon after, the elegant bookcases ending up at another ill-fated bookshop ("Books by Jerome"), which also closed within a couple of years. I don't know what happened to those magnificent cases!

"I've seen Hawley and his wife three times in the last year over at the El Cerrito Re-Cycling Center by the dumpsters beside the book turn-around. I mentioned to him that he should consider placing his publisher's archive somewhere, but he seemed oblivious. I think he must be in his late 80's."

well, I missed his passing. Sorry to see someone of renown in our little world go into the reeds.
Posted by stevenallenmay at 3:55 PM No comments: 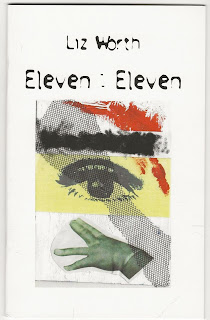 In the summer of 2018 I found myself in Toronto and, having never been there before, tried to make a mad dash around town taking in as much bookstores and record shops as one can on a family vacation. One of the items I picked up was Amphetamine Heart by Liz Worth. I liked what I read on the flight home (I was returning with about a dozen books from Toronto) and decided to write Ms. Worth who graciously sent me a copy of each of her chapbooks. She's known these days in Toronto as a Tarot card reader but she's probably best known for her Treat Me Like Dirt book which is an oral history of the punk scene in Toronto (and elsewhere) dealing with the years 1977-1981.

The earliest of Ms. Worth's published work was the 2008 Eleven : Eleven which was published by Trainwreck Press. The current website does not list her book but that's likely because the Press rebooted a few years ago. Eleven : Eleven is a 24 page short fiction book of extremely well written prose which might be consider a series of prose poems or just damn good writing. I was reading it today while listening to a mix tape of unknown origin that I inherited along the way. A cassette mix tape, mind you, not exactly punk music but period for the time frame I imagine this book covers. It made the reading experience more relevant, I thought.

I don't suspect that this would be easy to find in the States and could be extremely difficult to find - period - but it clearly shows the talent that was later highlighted in Amphetamine Heart. There are references to Tarot cards and related themes in Eleven : Eleven so it shouldn't surprise one that she went back to her first love when she wrote herself out (if in fact that is what she did)

I highly recommend reading her.
Posted by stevenallenmay at 3:54 PM No comments:

Ignoble Daydreams for the Impudent Minds by Randy Boone (2005)

One should never self-publish when angry. Not that the author didn't have a right to be angry but that one tends to only see things through the prism of anger. So, Mr. Boone had a bad experience with a publisher who reneged on a contract to publish Mr. Boone's book of poems. The result was a rather defiant middle finger to publishers and contracts and all. The name of his self-publishing "company" was I'm-More-Violent-Than-You-Think-and-if-You-Steal-My-Ideas-I'll-Smash-Your-Face-Up=With-a-Hammer Publishing. Just saying, a little defiant and tad bit angry.
Posted by stevenallenmay at 5:51 AM No comments: 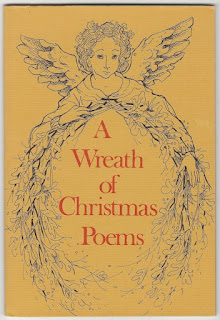 A Wreath of Christmas Poems
A New Directions Book
(c) 1972

Edited by by Albert M. Hayes and James Laughlin. Illustrated by Jose Erasto. A quaint seasonal chapbook. Handsomely presented.
Posted by stevenallenmay at 12:36 PM No comments:

writing during the season of death : a global pandemic to be observed, witnessed

Upheaval and staying healthy, home schooling and trying to absorb "the new normal" which won't ever feel normal.

and so, now we continue....... be damn skippy already!
Posted by stevenallenmay at 12:29 PM No comments: 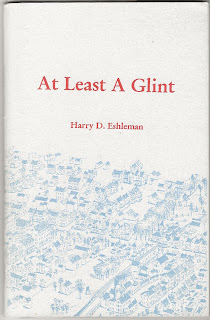 In 2019, while on the way to a quick weekend vacation in Ocean City, MD, I made a quick stop in Trappe, MD (a small truck-stop of a town) at the incredible Unicorn Book Shop and there found this book which definitely belonged in Berks County, PA.

Having moved to the DC area in 2004, I was unaware of his passing until I did some researching after bringing this book home. I have done a slight edit on his obit, but wanted to present it for those who didn’t / couldn't have known him :

“Harry David Eshleman, 85, died peacefully surrounded by his loving family May 10, 2015, in the Kutztown Manor. Born in Chicago, IL, to Paul and Selina Eshleman on October 4, 1929, he was raised in Lititz, PA. He was a graduate of the University of Chicago and received his Master’s from the University of Pennsylvania. He was a Veteran of the Army, having served in Korea.  He was a member of St. John’s UCC, Kutztown. He retired from Kutztown University in 1989 following 25 years of teaching.  He taught communication courses and was also a professor of journalism and served as advisor for the school newspaper and yearbook.  In addition to writing poetry, he was actively involved in promoting poetry.  He served on the board of the Wallace Stevens Poetry Society and was President from 1995-1999.  He hosted “Poet’s Pause” on BCTV for many years.  He served as editor of Bookends, the publication for the Berks County Library Association.  He published a large number of works ranging from poetry to essays.”

What was missing from the obit was that he had his own imprint : Eshleday Specialday Press. I haven’t found anything on the Net about the press but I suspect that he published a few other folks as well as his own work after retiring from Kutztown University.

I got to know him at the time he was President of the Wallace Stevens Chapter of the Pennsylvania Poetry Society and I was making noise leading up to the formation of the Berks Bards and the BerksBardfest poetry festival. I was on his poetry program a few times as well. Always well dressed and a bow tie.

Poetically, we are definitely from different generations but because of Eshleman, and poet Harry Humes, Berks County did have poetry flowing through the trees decades before Bardfest came along.

Posted by stevenallenmay at 11:55 AM No comments: