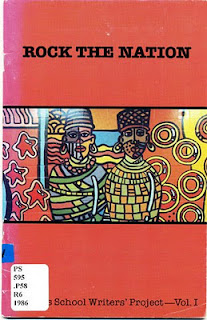 This staple-bound chapbook was sent to me a by poet-friend of mine who lives in the Midwest. It came from a library purge. Genesis school was/is an early charter school which presented an alternative educational experience. The poets in this collection are from the school. The wrap-around image on the cover is from a mural painted in the school.
Posted by stevenallenmay at 3:48 PM 1 comment: 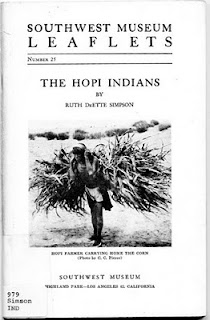 This is an informative 91 page chapbook with B&W photos and illustrations throughout. 3rd printing. Handsome, handy and nicely done. This easily could have been a book with a spine - that's an argument that I have made before - but in this case, no matter. It's a great little find. I suppose ideal for the intrepid adventurer keen on walking the lands where the Hopi once lived.
Posted by stevenallenmay at 6:45 AM No comments:

After Robinson Has Gone by Kathleen Rooney (2010) 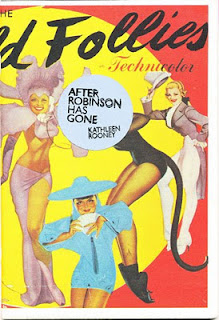 Staple-bound chapbook. Cover a movie poster folded and stapled, black plastic under-cover. I have received a packet from Greying Ghost in the past when purchasing one of their items. They are ephemeral-driven. Kitsch or classic, not sure. Intentionally historic or merely whiffing the past, not sure. Publishing good poetry, sometimes. These people are hopefully enjoying the heck out of their efforts, that much as the barest minimum. And they must be - every copy has a different movie poster cover!

#35 of 100 printed. This is less of a review than an acknowledgment. If you are familiar with Kathleen's work, you ought to get a copy of this chapbook!
Posted by stevenallenmay at 8:35 AM No comments:

i "won" a lot of books on ebay the other day. Treasure trove! I will be going through it for weeks!

thanks for tagging along on my meandering journey through the byways & foot paths of chapbook publishing and some of the incredible finds along the way. It's been more than fun. 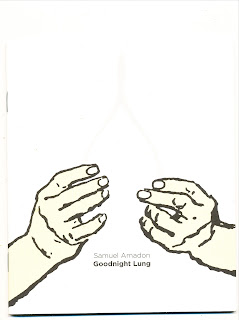 Beware! I am taking over and revising completely the 2011 rather pathetic review I did for Each H even though I very much like the work of UDP. I got to bring UDP to Robin's Bookstore in Philadelphia back in the day. They were doing a "anti-reading" event and it was great, really, for the 3 people there who saw it. It was a Friday night in Philly, who does a weird poetry event in Philly? I mean, 'attends'.

I didn't have a lot positive to say about Amadon's effort with UDP or their effort for him. A bit of a dud compared to many of the other things they have published. It felt rushed to me. BUT - I did learn the name Samuel Amadon because of it so that was worth it. No, I mean, not that night in Philly but a few years later when UDP really started cranking out their marvelous chapbooks.

Then I got Spy Poem which came from a Santa Claus in Upstate New York who dropped three bags of treasure on me. I had not heard of this press either but "Hey - remember Samuel Amadon 'Each H'? Have to read that." Well, it misappeared before I read it but I can read this one. And I do, and it's good. Okay, on the cover is a very small Star of David and a slightly larger Sickle and Hammer from the USSR but when reading this I see a rapper with hand gestures rocking these words. They were meant for the stage first, has to be. Pauses to breathe (and think) then another wind up and BOOM!

Back into the vaults with you, a keeper!

And finally, a double surprise for me was realizing that one of the 8 books I got from Octopus Books was in fact written by Samuel Amadon. A definite thread flows from his work. All 3 books are like from the same larger manuscript.
Posted by stevenallenmay at 7:44 AM No comments:

Faster Than the Limiteds by Thomas R. Bullard (1991) 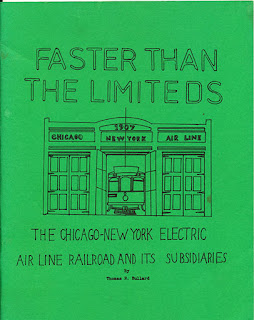 
This is an oversized chapbook of 84 pages. It's staple bound, thus the distinction. The author of this book has done a marvelous job detailing the subject with graphs, B&W photos and illustrations of some of the electric train cars used. It's really a wonderful book for those train buffs who have an interest in this field. Bullard has one enthralled with the subject from the beginning. It is stuffed with facts and pictures, a joy indeed for the people reading it.

Posted by stevenallenmay at 10:51 AM No comments: