In The War by Jennifer Jean 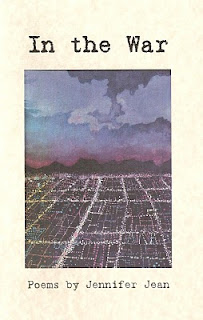 Big Table Publishing Co. seems to be located somewhere in Massachusetts, although they are reluctant to state exactly where. I find that curious for a publishing company. Really? You don't want people to know where you are located? How does that work for you? I mean, you have to send an email to them in order to submit poems for consideration through the mail. What? They email you back their mailing address? Weird, weird, and more weird.

It may well be that this book is about the Vietnam War through the eyes and memory of a little girl whose lost her father (twice?) to that horror. But it's as much about something else. Different/other things. It's an Odyssey across America. One girl's maturity coming with haunting shadows of sorrow. Perhaps; yet it can only give what a girl much too young to understand the HELL of what that jungle war did to her father, and every father/son/husband/spouse went through simply to survive it; little more than glimpses through a prism.

I am a veteran of the era although I served my four years (1975-79) state-side. Unless one lived through it, one has no real point of reference to it. The "it" lingers just off the page throughout this book. It's a valid effort to be sure, and as an effort it has, I do hope, helped the author to come to terms with things beyond her comprehension as a child.
Posted by stevenallenmay at 8:35 AM No comments: 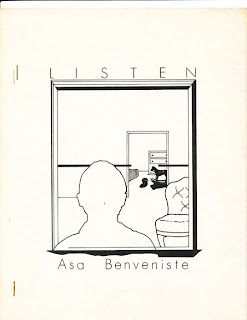 As recently as a few days ago I had no idea who Asa Benveniste was, nor Ray DiPalma, nor had I ever heard of Doones Press. Then I saw a listing on ebay for a chapbook entitled "Listen" and there was a photo and I looked at the photo of this chapbook and decided to investigate a little.

Asa Benveniste was born 1925 in New York, which he left in 1948 'after being pursued by a doppelganger in the same furnished coven in Irving Place which Madame Blavatsky inhabited several decades earlier.' Between 1948 and 1950 he lived in France and Tangier co-editing the literary magazine ZERO. From 1950 he has lived in England 'learning English, straightening ice cream bricks on a conveyor belt, character acting in the provinces, market gardening, rearing chickens and pedigree dogs, editing books and publishing poetry.'

ASA BENVENISTE: A CHECKLIST (in process)
Arranged by year, this checklist includes books and a few ephemeral items by poet and publisher of Trigram Press, Asa Benveniste. It includes collaborations and co-publications with other authors, but does not include appearances in periodicals. Corrections and additions welcome at any time. Items followed by ‘ns’ are those that I have ‘not seen’ in person. – K.S. (12.20.09)

A Word in Your Season: a Portfolio of Six Serigraphs w/Jack Hirschman (London: Trigram Press) 1967. [book]

Besides being a poet, Asa also worked as a printer, a typographer, and as a book designer. In London during 1965, he co-founded and managed the Trigram Press, which published work by Tom Raworth, Jack Hirschman, J. H. Prynne, David Meltzer, B S Johnson, Gavin Ewart and Lee Harwood amongst others.

In the 1980s Benveniste and his partner Agnetha Falk moved to Hebden Bridge in West Yorkshire where they operated a secondhand bookshop. When he died in 1990, Benveniste was buried in the graveyard of Heptonstall church.

Doones Press began as a small literary magazine, Doones, published by Raymond DiPalma, at Bowling Green State University in 1969. DiPalma began editing and publishing works of poetry as Doones Press in 1970. Doones seemed to run from 1969-1976. DiPalma's wikipedia page deals with his accomplishments as a published poet and his several books; No mention currently is there of his work as a publisher. Interestingly enough.

DiPalma is associated with the LANGUAGE poets. He now lives in NYC.

In the process, I discovered this wonderful recording by Roy Fisher of his poem, At the Grave of Asa Benveniste
Posted by stevenallenmay at 6:09 AM No comments:

This oversized anthology, edited by Kate Potter, is a great representation of the poetic voices to be found in the coal region during the mid-1990s. Among the nearly 30 poets represented here is Deborah Filanowski, whom was published by Plan B Press in 2005. 32 pages. Nice central PA collector's item.
Posted by stevenallenmay at 3:42 PM No comments: