3 books that got away (from Plan B Press) 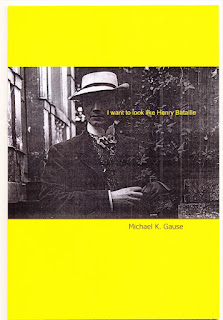 I mentioned on the Facebook webpage that is associated with this blog that in addition to blogging ABOUT chapbooks, I run Plan B Press and in that capacity we read a lot of manuscripts. Some are incredibly good and some of are simply terrible. And some simply get away from us. We pass on them even though they are good or the poet has submitted to other presses as well as ours and someone else agreed to publish them before we even read the work - ah, simultaneous submissions! Here are three examples of some that got away from us.

First, I want to look like Henry Bataille which was published in 2006 by Little Poem Press. Apparently that press is now "misappeared" as my daughter would say. While I am happy that Michael Gause found a publisher for his book, I am disappointed with the appearance of it. The cover image is a pixelated mess. It has the feel of a Print-on-demand job which I can not find rewarding at all. And, as a publisher myself, having 15 completely empty pages at the end of the books is really unforgivable. So now the book is not a chapbook, per se, because it has a "spine". But there is no writing ON the spine, so why exactly did you create one? It's a little thicker "sliver of nothing".

The writing I liked very much. I still do. But the "it" of it? We could have done better. 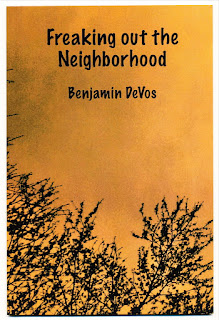 Okay, this one is more my fault since I didn't leap on the mss. the second I got it from Temple-grad Ben DeVos; my bad. He's a Philly boy and this book reeks of the city. Not in a bad way either. Just a great slice of the city. Like any book by Ryan Eckes or A Whole Armada of Loss by Blaine Martin, for instance. And there's the first line from his poem, The Painter, "A neighbor is not a nearby friend, but bystander" which is so deadly accurate to anyone who lives in a city (or for that matter in the burbs as well) Yet here again, the book is just wrong. The cover images does not reflect the book title or the work inside. It's another slick POD production (the cover is already curling and the book was printed in 2015) STILL, I can't complain because I am happy that he found a publisher right out of the shoot and, well, his second collection will be published by Plan B Press this season. If we screw it up, he has permission to kick my ass! I will have deserved nothing less. 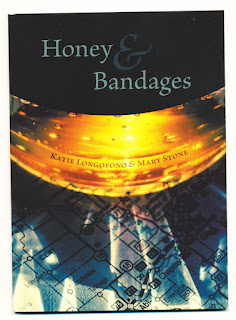 This is a handsome chapbook that Plan B Press did not act on in a timely manner and the authors, a number of years later, found a better home for it at Folded Words. The work is very good. The presentation is lovely. My only observation is that the chapbook size was reduced to bulk it out a bit in order to justify a spine. Of course it is a spine with no text on it. Book title does not appear on the spine. But that's a minor grievance for a wonderful little chapbook. Something that only a publisher might note. It's a great little book. 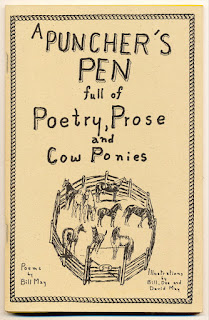 A Puncher's Pen
full of Poetry, Prose and Cow Ponies
Bill May
self published
Colorado (?)
1995

I got this one because his last name is my last name. I come from a family that had 8 generations of William May's. This guy ain't any of those guys. 89 pages of yellow paper. Illustrated by family members. This Bill May has two other volumes of his work. All the pieces here are hand-written.

It's sumptin.
Posted by stevenallenmay at 1:28 PM No comments:

Making Something With the Stars (1975) 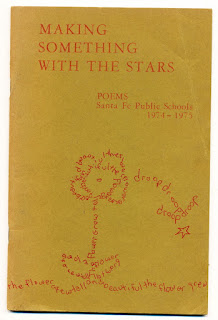 Clever book for getting young teens interested in poetry, language, and visual arts. Even concrete poetry is represented here! 42 pages. I don't recognize any famous poets or artists within but that isn't what that was about. It was about turning on students to language arts. It's a noble effort.
Posted by stevenallenmay at 1:21 PM No comments: 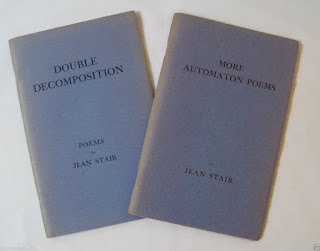 Sometimes the find are so unique that the internets provide no useful information whatsoever.

Like these two - I got them from a Bookstore in Amherst, MA. The listing suggested they were Beat or New York School. I somehow doubt that. There is no publisher information which suggests to me that they were self-published. The Printer was located in Connecticut. They were both published in 1955. Whoever the poet Jean Stair was remains a mystery. There is no information about the elusive author here. This a mystery I will be attempting to uncovering for a long time.
Posted by stevenallenmay at 2:57 PM 1 comment: