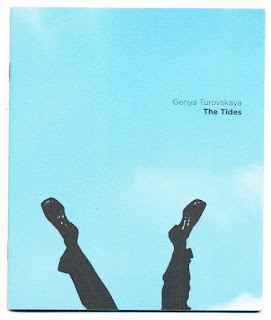 Another in the 8 pronged attack from Octopus Books. 31 pages of a splattering of ink on mostly empty pages. The book is good, but sparse. As I am reading through the 8 chapbooks, I am noting the sparseness. More empty space than words. Beautiful covers masking few words.
Posted by stevenallenmay at 8:55 AM No comments:

a blog as a zine, electronic?

I am currently reading the 2005 book The Rise of Lo-Fi Culture by Amy Spencer and I am reading about zines and while this book is a bit dated now, it got me thinking how blogs have taken over - generally, and quite successfully - for zines. But there is something lost in the electronica; the fact that one is holding something REAL. So, I am wondering if I should make a paper form of this chap*book blog. Who on earth would care to read it? How many? I mean, if I were out there and had this particular interest (the obsession that leads me to do this blog) wouldn't it excite me to see someone else bring out such a zine? Of course it would. But hasn't that ship already sailed?

I could never write about every single chapbook ever made - no one could. There are chapbooks that have been landfilled, destroyed by fire or neglect. Promised and never brought out. All manner of reasons and excuses. There isn't a single location in the United States where chapbooks are collected. The Library of Congress? um, no. I remember when I was at Robin's Bookstore in Philadelphia, and would spend time in the myriad shelves of the basement there which were filled with small run chapbooks by lesser (or un-) known Afro-American authors. Not collected at Temple University or anywhere else. Not written about or reviewed. Just there on those shelves. Well, that bookstore is going and the space where all those chapbooks were located has been converted into a restaurant. So what became of all those books?

When poet Lou McKee died in Philadelphia I had heard that he had an extensive collection of chapbooks - but that they were kept in a place where they were exposed to moisture and most were ruined. Losses upon losses. The fabulous book A Secret Location on the Lower East Side delves into a good deal of the parallel universe of Mimeo and chapbooks with incredible listings of Presses long gone but relevant. But even that book would have to be dwarfed by an honest full listing of every publisher from every region or state, and a listing of the folks actually published by those Presses. The numbers would be staggering. And we really only know about those who went on to achieve work of greater note. Some poets only published with small presses. Others were themselves established poets who were equally adapt at being publishers.

Should I even think about this further or just publish and move on?
Posted by stevenallenmay at 1:46 PM No comments: 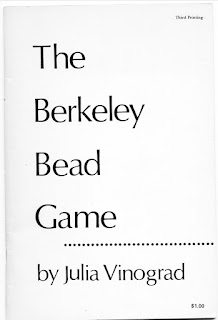 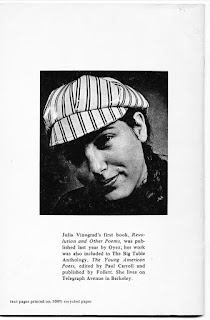 Ms. Vinograd's entire life has been one of being a street poet and advocate for those society has chosen to ignore. This is her second collection. The pomes remind me of the work of Philadelphia-based poet Charlie O'Hay. A poet of the street. Who lived the street. In the case of Ms. Vinograd, it's been 50 years of labor. Great collection of grit, street, and human cast-aways.
Posted by stevenallenmay at 5:59 AM No comments:

The Continuing Misadventures of Andrew, the Headless Talking Bear by Jonah Winter (2006) 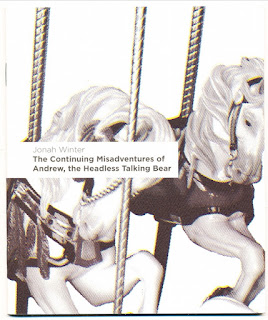 Tiny gem. Great collection of work in a small package. Worth the read.
Posted by stevenallenmay at 10:41 AM No comments: