After visiting the website of this publishing group, I can appreciate what the goal of this particular chapbook is. Wedding, or perhaps, welding the work of human hands with the machinery of printing. Staple-bound booklet, it's a very thin "book", this effort feels like an art school project that someone made themselves and distributed around in a complete DIY fashion. And it is no knock on DIY either. But I digress.

It's a visual exercise.

Posted by stevenallenmay at 1:32 PM No comments: 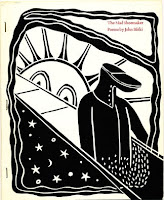 In the history of Toothpaste Press, this is one of the earlier mimeograph chapbooks that were made. 1973 was early, this is among the earliest chapbooks made by Toothpaste Press. Staple-bound which indicates the age of the book itself as they quickly went to hand-sewn books. It's size, 8" X 10", is another indication. The cover image came from a linoleum block by Dave Morice who went on to create Poetry Comics and co-found the Actualist Poetry Movement.

Unpaginated pages, mimeographed. This book was John Batki's first book. 300 copies were printed.
Posted by stevenallenmay at 7:48 AM No comments:

Posted by stevenallenmay at 5:11 PM No comments:

poems of Mallarme by Brian Coffey (1990) 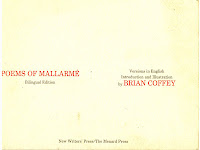 Oversized staple-bound chapbook. 34 pages. Bilingual Edition. Mallarme was a visionary poet who anticipated several 20th century movements (Dadaism, Surrealism, Futurism) as well as through use of typography laid the foundation for Concrete Poetry roughly 50 years after he began his own experimentations. In that sense, this book is a sampling - a tease of the range and scope of Mallarme. A first bite from the fruit. An introduction to his work.

It succeeds in that, but does not include any of his typographic works. His breath-taking and breakthrough piece, A Throw of the Dice, itself could be this book. Laid out in a manner not seen since it's original French appearance, perhaps. This collection is worthwhile but not stunning. A viewing of Mallarme's work should attempt to be stunning. Nonetheless worthwhile.
Posted by stevenallenmay at 8:49 AM 2 comments:

Originally published in 1940, this oft-reprinted staple-bound book was illustrated by Leo Schreiber. The lengthy sub-title of this books is "Being Largely a Compilation From the Documents of Governor Bradford and Governor Winslow, Severally and in Collaboration; Together With a List of Mayflower Passengers." 76 pages. Has two pages of period ads in back of book.They are priceless in themselves.

A very good history of the time of the landing in Plymouth of the original Puritans. For those interested in this history, this is a fine document.
Posted by stevenallenmay at 8:10 AM No comments: