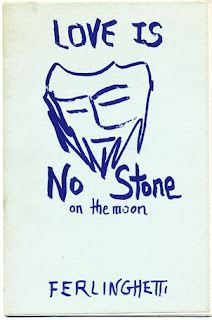 Love Is No Stone on the moon
Lawrence Ferhlinghetti
ARIF Press
Berkeley, CA
©1971

This tiny chapbook by Lawrence Ferlinghetti is extremely rare and incredibly interesting or a complete joke, depending on one’s take on spontaneous creation and extreme use of marginalia. Unnumbered pages. Original text from unknown source, Ferlinghetti scrawls in magic marker his “poem” across the width of the pages. As though anarchist, as though felon. As though mischievous child with a new destructive toy. The original text simply paper for his creation. As stated on the first page of chapbook, this is an automatic poem. It was written in June 1971.

I see this as a fantastic experiment, the sort of thing he might have done while at Sorbonne. It’s incredibly interesting. While it is unclear if the text was offered to him for manipulation or he arrived at this text and creation on his own is not answered by the author nor the publisher. There are a grand total of 8 pages of Ferlinghetti prose/poetry in the chapbook. The back of each page is blank.

The chapbook merely is, it exists. It is part of some of Ferlinghetti’s bibliographies and is omitted by others. The final passage, part VIII, is most telling : “Be like a white bird/in the snow”. Absolutely!

Introduction by Allen Ginsberg. Unnumbered pages. Cover design uncredited. First collection by author. Plymell came from Witchita, Kansas – part of the Witchita Vortex as Gingberg described it.
The work feels very “surface” to me and a bit dated. At the same time, it’s his first collection and that is extremely notable which is why I did it twice.

love these little books from Sweden, signed. Watercolor covers. Handsome little books. This one is a New Year’s Greeting from the press. Nice touch.

Number 5 in the poetry series by Kamini Press. Unnumbered pages. Watercolor cover by Henry Denander. Kryss, also known as T L Kryss was a comrade of d a levy in Cleveland, Ohio. This small chapbook came with a hand tinted signed print (of a rabbit) by the author.

Poet, artist and rabbit master T.L. Kryss is the publisher of the poetry series Black Rabbit Press. He published, with rjs, the groundbreaking anthology of d.a.levy's work, ukanhavyrfuckinciti bak (1967). His poems have recently appeared in Abraxas, Death Row, Measured Steps, The Outsider, Unarmed Poetry Journal, et al. Books and broadsides include Current Outsider (Vagabond Home Page), Downwind from the Fires of Nothingness and Spring into Winter (Kirpan Press), Sunflower Wars (Bottle of Smoke Press), Just Blue Skies: Poems for & after d.a.levy (an electronic chapbook appearing on the d.a.levy homepage, Light & Dust Anthology of Poetry) and The Search for the Reason Why (Bottom Dog Press)
Posted by stevenallenmay at 10:52 AM No comments: