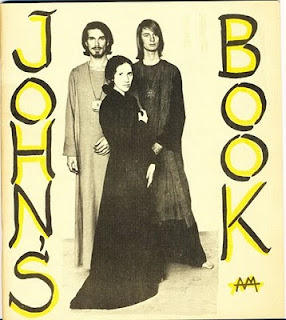 I once bought a copy of Kirby Doyle's chapbook published by the Poets Press but I couldn't stand it (think of the annoying woman's voice in "Singing in the Rain"). So, I sold it. But I now had no chapbooks published by the Poets Press and I do want at least one, at least one book that Diane di Prima was involved with making. And as it happened, I went back to the same bookstore where I got the Doyle and bought three chapbooks :

Cover photo of Marlowe, Creeley, and di Prima taken by Daniel Entin. It's curious to read any book written and published in the 1960's, as the poets attempt to be "new and different" by reviving literary traditions from the Middle Ages. The wearing of robes, for example, on the cover is a curious image as well but very fitting of the times. The poems here are mostly personal and not "telling of universal thoughts". My sense is that Marlowe and di Prima were involved in more than a professional way. Not certain that these poems on their own would warrant publication otherwise. It's a rarity, it's in fantastic condition. It's quite a find.

The poems in this collection were chosen by Alan Marlowe from notebooks. Unnumbered pages. Cover drawing by George Herms. Great poems.

unnumbered pages, in Latin and English. Cover drawing by Brett Rohmer. From the esteemed collection of Mark Greene, Philadelphia. Chapbook is nearly perfect condition.
Posted by stevenallenmay at 5:39 AM No comments: