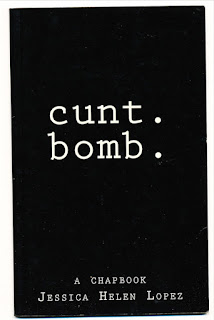 Slam Poetry has created in 1990 by Marc Smith of Chicago who lamented that no publication would print his work. So, he "invented" a poetic form in a competitive format where money could be made via the performance of one's "work". I am oversimplifying, perhaps, but I am also not a fan of slam poetry. No one who has come up through Slam has been successful on the page. This particular chapbook is typical of the chasm between poetry on the page and poetry from the stage. The most shocking words in the entire book are the two on the front page: the title words CUNT BOMB. Those are some words alright, surprised that WHORE wasn't scribbled across the back cover for good measure.

Even as recited work, slam poetry is shallow. It's performance but there are rules about what qualifies as performance (no props, no visuals) so really it's a performer, com'on really that's what they are - they aren't poets, the language is in no means "poetic", a performer who can recite his/her work. And if they stumble, if they forget a line they tend to attempt a reset; they start over. What does or does not work on the stage does not at all translate to the page. Nearly even. Perhaps Saul Williams bridges that divide, depending. But for the most part no. And I speak as someone who has slammed and come up during the early years of slam when the film came out and the movement was fresh but even then I felt and sensed and knew that what was on the page was empty bullshit and what was on the stage was written for performance and did not come from the page. And these slam'vocates who proclaim they are heirs to the Beats are delusional. Yes, they all were outsiders. All were derided by the establishment, however one defined it, but not all Beat poets read their work well in public whereas the very existence of SLAM is performing in public.

I have been saying since the mid-1990s that a slam artist should release a CD of their work SPOKEN and not a book. Never a book. Because it does not translate and I maintain that to this day. I have repeated told poets who have sent me their manuscripts that aren't at all manuscripts but skits, pieces to be performed on stage that they need to present their work in some electronic way since I (as Plan B Press) would not publish their work as a book. This book reenforces my view entirely. Perhaps Ms. Lopez's stage presence is awesome; but her book is extremely lame.
Posted by stevenallenmay at 1:16 PM No comments: 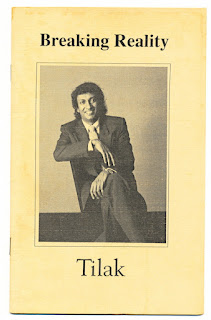 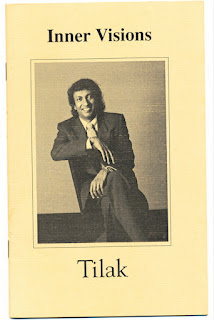 Sumithrayo organization published a series of staple-bound booklets in 1991 to promote the "teachings" of this fellow named Tilak. Not much to see here, really. Breaking Reality is 12 pages. Inner Visions is 10. Not a perfect 10 but a mere 10. And without the space is the title of one of Stevie Wonders greatest albums.

Just acknowledging them before pulping. Pulped. Move along.
Posted by stevenallenmay at 5:07 PM No comments: 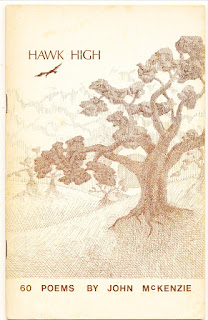 This is a dated chapbook. Yes, 1974 but also dated in that it's really not poetry as much as its song lyrics. I guess, I guess it's song lyrics because as poetry on the page it really isn't good. The singer-songwriter/poet is still with us. Living in Florida. There are some illustrations throughout the book and the copy I have was signed at some point by the author. But..... save a tree! (like the one drawn on the front cover!)
Posted by stevenallenmay at 9:46 AM No comments: 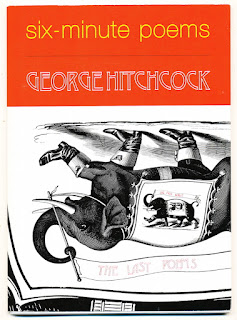 George Hitchcock was an influential publisher and writer for several decades before his death in 2010. His magazine, kayak, along with the books published under that impress touted some of the most significant writers of his generation. His own work was highly praised as well. These were among his final poems, collected here by tavern books, a non-profit publisher out of Portland, Oregon. Hand-sewn. Handsomely done.

This work would not have been possible without the assistance of Hitchcock's partner, Marjorie Simon. These 15 poems were selected from nearly 100 "final poems". Most poets do not know their final "final" so whatever is produced before last breath is determined by the living. The poet merely writes. It's what we all do. Hitchcock's poems written toward the end of his life reflect the humorous observations of this surrealist pen's man. Life is absurd as well as bitter as a scorpion's bite. He knew it, and wrote it. And we are collectively better for it. This collection is a fine tribute to a great American poet.
Posted by stevenallenmay at 3:09 PM No comments: