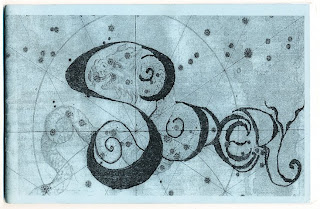 
This is a follow-up to Sorcery Part 1 which was written in 1997-98. Hugh provides the text and Mary creates the images. This book was laid out in Word, which Hugh acknowledged was very difficult indeed as there are a least two images on every page. Unpaginated. 5 1/2" X 8 3/4". Green cover. Staple-bound chapbook. Meant more as an experiment than for a wider audience. The chapbook retains a sense of book creation in the late 1990s - early Internet period. The countless images, all Black & White apparent clip-art versions of highly colorized Medieval images, are either overly dark or washed out. This does not take away from the writing but it doesn't enhance the experience in a way that I am certain that the Behm-Steinbergs intended either.
Posted by stevenallenmay at 10:59 AM No comments: 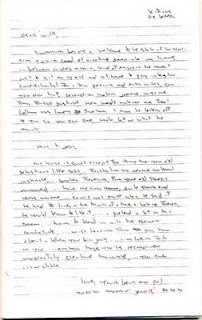 I first became aware of T Kilgore Splake's work from some broadside published by Alpha Beat Press of New Hope, PA. I wrote to "Splake" and he replied with a letter and some of his other work. One of those items was this chapbook.

42 page diary, staple-bound book with B&W images. The writing, in the manner of Jack Kerouac, is interesting. For myself, the enlightening - the peeling back of the onion skin - is itself part of the back story which is something I am always eager to find. For example, one of the presses that brought out some of Splake's books is called enigma press in Philadelphia. I lived in Philadelphia for two years and was in charge of the chapbook section at the venerable Robins Bookstore and I never saw anything by enigma. In fact, I never heard of enigma until I looked over the material I received from Splake over a decade ago.

I found a wikipedia page on Splake which indicates that he is editor in chief of Angst Productions. Angst Productions just happens to be a publishing company that has produced a number of his books. I am just saying....
Posted by stevenallenmay at 8:53 AM No comments: 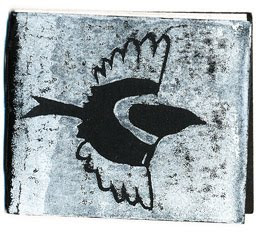 
This is one of the smallest books I have yet seen or received. 2 1/2" X 2 1/4" booklet. Good poetry. Interesting cover and tiny format. Wow!
Posted by stevenallenmay at 4:38 AM No comments:

Emily Dickinson: Profile of the Poet as Cook (1976) 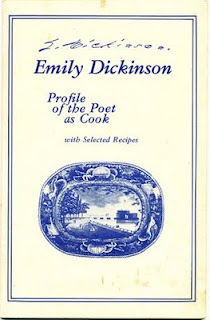 Fascinating subject! I had never thought about Emily Dickinson in this regard. The authors were all connected to the Dickinson Homestead in the Bicentennial year. A well researched and illustrated chapbook. 28 pages. Staple-bound. Text mingled with recipes. Pretty awesome indeed.
Posted by stevenallenmay at 2:34 PM 3 comments: 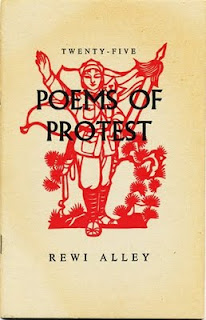 This fairly rare chapbook published in the midst of the Vietnam War, in the critical year 1968. These poems were written in China by the author who has spent a good portion of his life living there. 41 pages. Cover of unknown origin. Possible woodcut of Chinese or Vietnamese solider waving. Fascinating look at "life during wartime" from a different perspective.
Posted by stevenallenmay at 4:42 PM No comments:

Poetry Baltimore: poems about a city

The backstory here is this : I was attending a poetry reading in Annapolis the same week that a reading had taken place in Baltimore for the 10 year anniversary anthology of Beltway Poetry Journal, edited by Kim Roberts. I had met Kim three years previously and we had exchanged infrequent emails during most of that period, until she contacted me about the possibility of Plan B Press publishing an anthology. Our meetings turned into a series of proposals and counter-proposals leading to the creation of Full Moon on K Street: poems about Washington D.C. (Plan B Press, 2010)

It became obvious to me that the anthology was going to hit the space in Washington, D.C. when an article on Kim and her anthology appeared in the February 7, 2010 edition of the Washington Post. Moreover, Kim had researched earlier anthologies of Washington DC poetry and had posted her findings in an incredible entry on her website - Kim Roberts on DC Poetry Anthology

I had never attended a reading in Annapolis but there were a few featured poets that night I wanted to hear, so I went. Earlier that same week, a piece appeared in the Baltimore City Paper about the tie-in reading occurring in Baltimore for Full Moon. In the piece the reporter bemoaned the fact that there was nothing like Kim’s anthology for Baltimore. I mentioned what this reporter had said to a couple I had met that evening, and they got very dejected. It turned out that the couple I was saying this to was the couple who had put together Poetry Baltimore : poems about a city in 1997. They were understandably a bit upset by the exchange and I offered them a copy of Full Moon…

A few weeks later I received a very nice copy of Poetry Baltimore in the mail. This handsome book contained 30 poems by poets with a connection to Baltimore including Lucille Clinton, Barbara DeCesare, A. V. Christie, Linda Pastan, and Kim Roberts – wait, that Kim Roberts? Yes, it turns out that Kim was friends with Sam and Virginia. Had attended their wedding.

This anthology is 36 pages long, in the universe of chapbooks, but perfect bound. The publisher, WordHouse, Inc. was a new organization in 1997 when this anthology came out. It was one of a handful of books that were brought out by WordHouse. However, there are faint traces of them on the internet. Like so many good ideas, things happened.

I am glad that Virginia Crawford was able to track down a copy of this great little collection. Copies are scarce. But isn’t collecting at least half the search? It’s worth the find!
Posted by stevenallenmay at 2:33 PM 1 comment: