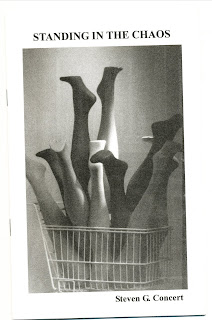 Concert is a mover and shaker in the poetic world of NE Pennsylvania. He has been actively involved in the Pennsylvania Poetry Society for a number of years and have at least one other book out. This one is thin. A mere 13 pages of verse. I am mentioning the book to talk more about the poet and the fact that poetry thrives all across the state. I am glad to have gotten to know or read a good number of poets from all over PA and hope to spread the wildfire of poetry wherever I roam. They have all inspired me. So, thanks, Steven. Thanks!
Posted by stevenallenmay at 7:30 AM No comments: 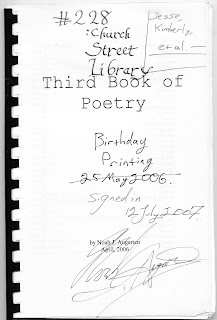 
Spiral bound chapbook. Plain paper. Unpaginated and yet there’s a table of contents with page count. I mean, unpaginated means no page numbers and there’s a TOC with numbers. Um, yeah, okay: I give up.

It is way too often true that just because someone can doesn’t mean someone should and that’s is especially true of self-publishing books. To friends and family this might be welcomed. But to someone reading it who doesn’t know the writer except for the words on the page, this effort really should have been suppressed.

Posted by stevenallenmay at 6:54 AM No comments: 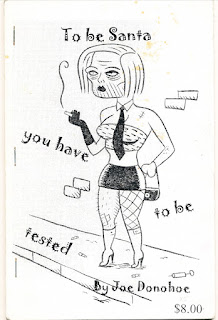 To be Santa you have to be tested
Joe Donohoe
little vanity press
San Francisco, CA
(c)2002

When I was in Toronto over the summer I happened across books by Canadian writers Liz Worth and John L'ecuyer dealing with "cool fringe" culture : drugs and music, but mostly drugs. So when I found this tiny sliver of nothing, the chapbook by Joe Donohoe, I thought of the cool Canadians. This one though wasn't quite the others. Reminds me of that Sesame Street tone "One of these things is not like the other". Indeed. Not that the writing is terrible because it does fit what the Canadian writers were portraying. It's that the presentation was god-awful.

So, I found Donohoe's chapbook on a shelf behind a front row of books, and it didn't stand out so much as I was intrigued by the thinness of it. I recognize a chapbook when I see it. This staple bound effort is completely slap-dash in the most kind was of saying it. There are illustrations in the book but they didn't distract from the absolute primitiveness of the book's appearance. They actually make it more blatant since the illustrations look like they were photocopied poorly and simply put in as pixelated and gray and dirty as they were. Plus each illustration has the title of the book above the image. Like I would be confused or something? I am holding a wreck of a chapbook, I know what I am holding. I half expect it to vomit on me at each turn of the page. Like a chapbook form of a bad punk music show where a speaker falls on a teenage girl and splits her head open. Gushing blood and puke and boy did you see that, dude, that was awesome! (except it wasn't) And neither is this chapbook but not everyone feels like way about his work! A different chapbook by Donohoe was actually distributed by Last Gasp. He's a niche artist, it seems. Not my niche, sorry.
Posted by stevenallenmay at 12:24 PM No comments:

Anticipating You by Julia Tilley (2002) 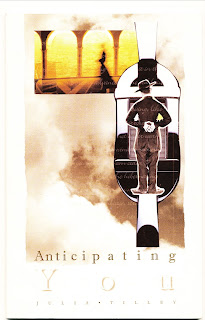 Anticipating You
Julia Tilley
Joyryder Enterprises
Harrisburg, PA
(c)2002
Jumping into the time machine for a second time to deal with the previous published work by Julia Tilley, we come upon her 2002 book, Anticipating You, which was published by Jennifer Ryder. Or rather "a" Jennifer Ryder since I was about to snap-assume that the publisher of this book was also related to Debbie Ryder, a Harrisburg-area poet, but the website given at the back of the book goes to an Australian writer of best-selling romance novels. Not sure I can square that circle.

Regardless, this book is much better made than the 2009 effort. The poems are tighter, the presentation is more professional; it's just better. Joyryder Enterprises has disappeared into the ether of time. No electronic footprint left to follow. And to be fair to all concerned parties, I had by 2002 moved to downtown Philadelphia and was trying to lay siege to that fine city. Harrisburg, in case some of you don't know, is the state Capital of Pennsylvania and like some other state capitals is much less interesting than the largest city in the state and in the case of Pennsylvania - that means less interested than TWO cities : Philadelphia and Pittsburgh. But it did have a poetry community in Harrisburg that was tighter and more buoyant than most other communities in the state. I tip my hat to them! Uptown Poetry Cartel, et al.

Julia Tilley is still quite active in the arts - she has done a one person show as Emily Dickinson recently and is part of the Flying Marmottes Performance Troupe. Good on her!
Posted by stevenallenmay at 10:08 AM No comments:

Cheez Whizz and Other Processed Poems by Julia Tilley (2009) 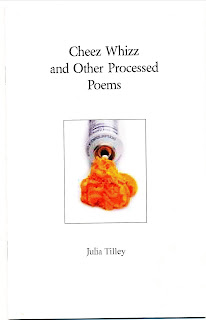 It doesn't help that I know one of the principals in this endeavor. Back in the day, before I left for Philadelphia, I participated in the poetic scene from Allentown to Harrisburg so I know a good number of the active poets in the region. So it does pain me to say that this chapbook coming out in 2009 with such a horribly pixelated cover image is simply not good. These are 24 pages of unremarkable poetry as well. Unfortunate, especially in light of her previous work (the 2002 chapbook Anticipating You). I will discuss that one next.
Posted by stevenallenmay at 12:56 PM No comments: 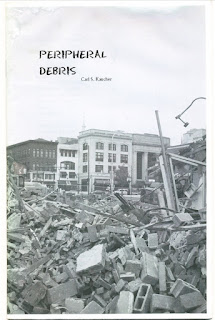 This is the other self published chapbook that Carl made earlier this century. He seems to have a new book out. Congrats on this leap, Carl!
Posted by stevenallenmay at 9:06 AM No comments: 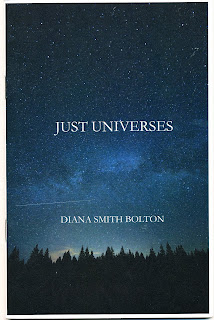 Diana Bolton is the founding editor of District Lit. Her work has been featured in numerous publications. This is her first chapbook. The poems within are good and the visuality of the physical book is adequate but it overall lacks something.
Posted by stevenallenmay at 12:39 PM No comments: 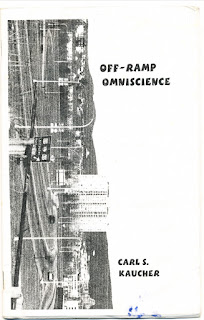 The image is that of a cloverleaf where the by-pass and roads leading into Reading and West Reading, PA convene. This self published chapbook with the quite pixelated photo on front and similar photos throughout is the work of Carl Kaucher, who along with her sister, Candace, were among the local talent around at the time that the poetry scene in Berks County, PA was coming together in the mid to late 1990s as I remember it. See, I was a catalyst of that particular shift in poetic happenings there in Berks County which led to the Berks Bards and the poetry festival that they present annually, Berks Bard Fest. The first year of that festival was 1999 and this chapbook was either created that year or possibly in 2000. I don't recall and since there is no publication information it's impossible to be sure. I do remember seeing it around before I moved to Philadelphia in 2001.

Fast forward to my last trip to Berks County, PA and I visited the same place that I found books from Norman Pritchard's library in 2001 and in a trailer where books are dumped, I found a handful of chapbooks of which this was one. There's a certain amount of symmetry in discovering chapbooks from that period now. The poetry festival is 20 years old now and those poets and artists who made up the first core of the poetry readings across the county from 1995-1998 are now themselves 20 years older. I look that the chapbooks as historical documents, not for the poetry in them per se, but for the time period and the fact that many of them were complete DIY efforts.

Thanks for the memories, Carl. I hope you are well.
Posted by stevenallenmay at 2:49 PM No comments: 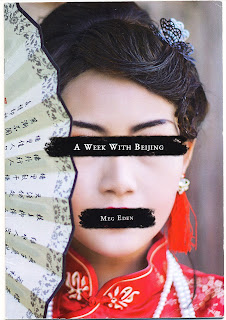 I enjoy the work of Meg Eden. Now, I have to say that I am limiting these comments to the one book of hers that I have - this one, but this one is good. Just sayin'. I got to hear her read in Arlington several months ago. It was a worthwhile experience. All the poems in this collection have to do with a person or city or State that may or may not answer to the name Bejing. Short poems with a zip in each one. Very cool.
Posted by stevenallenmay at 1:05 PM No comments: 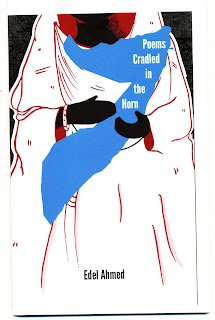 Poems Cradled in the Horn
Edel Ahmed
self published
(c)2017

I am writing to acknowledge this book. Perhaps the translation fails to bring forth the color of the original language, but I see a dull palate here. The downside of self publishing is that there is no one to suggest that an author not move forward with a project. Perhaps too this does speak to people from the Horn and I am simply missing the context that informs the pieces. Perhaps, maybe, but
Posted by stevenallenmay at 1:45 PM No comments: