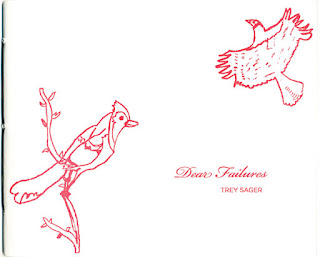 This is yet another finely produced chapbook by Ugly Duckling Press. Letter-pressed and hand-sewn. Quite lovely indeed. Each poem begins "Dear...." as though addressing some person or prototype. In addition to being weary of the "first person singular" in each poem, I see here an example of 2nd or 3rd generation New York School poetics (the mangled ghost of Frank O'Hara whisks by). "I did this and I did that" poetry. Referential and self-referential. Boring and supremely boring. Besides some interesting phrases throughout, the poems are empty sieves.
Posted by stevenallenmay at 9:46 AM No comments: 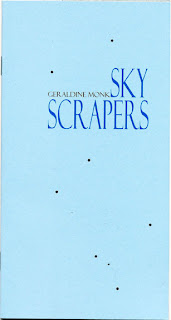 What is it about some micro-to-small presses that leads them to republish works 20 years older still and originally printed in, say, England? Geraldine Monk is a much published British poet whose work here is reprinted from her 1985 collection by the same title, published originally by Galloping Dog Press. This version is an oddly sized book resembling the dimensions of a sky scraper.

fewer & further press is/was a Boston-area based press which, according to their own blog, seems to have run out of steam in 2010 (there are no blog entries since March 24, 2010 - one can draw their own conclusions)

The work is thought provoking and good. The book is handsomely made. It's worth looking for. Of course, I would like to see the 1985 original for comparison sake, but..... that's me.
Posted by stevenallenmay at 4:37 AM No comments: