A Bundle of Sticks by Jim Mancinelli 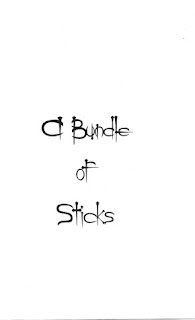 Prior to Plan B Press publishing Jim Mancinelli's chapbook IN DEEP in 2004, he had self-published one chapbook; Primer , and 2 broadsides. Both of his broadsides were particularly political. One was entitled "A Bundle of Sticks". It was published by Squirrel Baby Press in 2002.

A Bundle of Sticks deals with the homophobic period of time as the new Republican regime took over the nation with George Bush, the younger, established as President and Congress held by Republicans in both houses. The right wing regime was now in place and with the post 9*11 patriotic hysteria rampant across the country, those who sought equality for minorities, however that word is defined, were being marginalized and silenced. In this atmosphere leading up to the invasion of Iraq, Mancinelli fumed about the treatment of gays across America and how little attention was given to their brutalization by their "fellow citizens". (recall if you will, the name Matthew Shepard)

This led to the vomiting of that outrage on paper, to the creation of this broadside. Starting with Walt Whitman's "hearing America sing", the song that Mancinelli hears is hate-filled and venomous. It echoes another time in another country (Germany from 1933). It is not the land that Jim Mancinelli grew up in; it is not a land of love and tolerance but one that recoils from its own hideous shadow. A nation that kills what it does not understand. A nation seething in self-loathing.

In the midst of the new wave of "the culture wars" being waged in America over gay rights - still, to this day - this broadside is an important reminder that the era of turning the other cheek has not secured the rights that people who dare to love their "fellow man" (or fellow women), are deemed unnatural by those who can not maintain their own monogamous married states (consider how many of the leading Conservative blowhards in the US have been divorced - more than once!!!)

This is an important statement being made, a must read.
Posted by stevenallenmay at 6:54 AM No comments:

Also, I have recently written about obtaining a copy of the first chapbook by Judson Crew. Well, someone posted on my blogger page that Crew died on May 17, 2010. Rest in Peace, Mr. Crew (and your hatful of aliases), may ALL of your personas glide off into the sunset.
Posted by stevenallenmay at 6:27 AM No comments:


Each “issue” of this magazine is unnumbered with a stiff paper stock cover. They retailed for a quarter. #350 is entirely made up of 12 translated sonnets by Paul Verlaine. The translations were done by Murray Marshall.

There is precise little on the Net currently about Murray L Marshall, his wife Hazel S. Marshall, or their publication, Modern American Sonnet. M.A.S. appears in special collections now online and in various libraries. A very few copies appear for sale on the standard online platforms. Not much to go on.

#355 has sonnets in it by Margaret G Hindes, Bessie Berg, Alfred Leland Mooney, Mildred W. Bradley, Bonnie May Malody, and Joseph Upper along with Murray L Marshall. Now at least I was able to find something on these people – they were more than NAMES. They had recorded lives!

Margaret G. Hindes was married to Osmond Molarsky in 1971 until her death in 2002. They lived the San Francisco area. Ms. Hindes had been a social worker and poet. Molarsky had been an author and radio personality.

Bessie Berg’s work appeared throughout the 1950s in publications like Desert Magazine. She lived in Rio Linda, California.

Alfred Leland Mooney was an educator and a poet whose work appeared in newspapers and magazines in his day. He died in 1977 at the age of 70.

Mildred W Bradley was the author of the collection Living and Gleaning published in 1977 by Prairie Poet Books.

Bonnie May Malody lived in California and wrote haiku as well as sonnets.
Posted by stevenallenmay at 4:25 AM 2 comments:

each chapbook is a story in itself

Each chapbook is a story in itself - the publisher, the poet/author, the designer/illustrator - each has a story and a history. Along the way, I have found many tales and yarns. Some fascinating and others truly pitiful. Part of the reason I write this admittedly infrequent blog is that these authors - these publishers - these people need to be remembered in some fashion. Their chapbooks alone acknowledge their existence as people. Their names live on, however delicately, through their "thin slivers of nothing" (the weight of a chapbook when stacked on a shelf with various TOMES between)

It takes people like me to find and collect them. It takes others to create them and others to bring them to a weary public, forever put upon to be amazed at the new next wave of material splashing against the shoreline of their attention span. The shoreline is always in recession.

It's not so much a matter of locating a priceless gem of a chapbook but simply to find one whose author and publisher and illustrators have disappeared from our consciousness. And to bring them back to life - just by mentioning the details .... the very EXISTENCE .... of the chapbook again.

I have up until now, presented the details as clinically as possible, when merited I have gone into a bit of detail more but not much. My purpose has to been to acknowledge the chapbooks themselves. Sometimes it was been to bemoan the making of a dreadful creation, sometimes trees should not have fallen for a book's making. But for the most part, I have been incredibly surprised by the backstory of some presses and some authors.

Even the recent finds of chapbooks by a Pegasus Buchanan proved worthwhile although I would never had purchased them for their literary merit (don't like that style of poetry, I am afraid) but for their production quality and thoughtful creation. Someone was thinking about the presentation of the work - I admire that.

Instead of writing about groups of 4 or 5 chapbooks at a time, I am going to see if I can write more about a single chapbook at a time and see how that goes. I do have a small and committed audience (thank you) and I won't try and bore anyone.

Look for something different tomorrow! 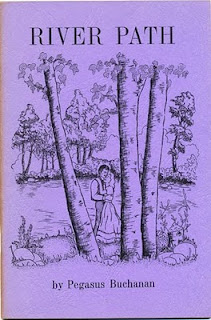 I found 2 chapbooks by a Pegasus Buchanan on ebay for very little money. Never heard of her, the seller lived in California. Why not? What I got when they arrived were two rather interesting enigmas.

Pegasus Buchanan is as much "from another generation" as poets in the 1850's would have been to her. She is what I would call a "watercolorist" as a poet. Her poems, not surprisingly, were often published in various US magazines in the 1950s & 1960s. Each of her chapbooks were illustrated by someone named Jane Forsyth.

Ms. Buchanan was born in 1918 and died in 2006. In her adult life she was known as a mainstay of the California Federation of Chaparral Poets. She had served as President of this organization over many years and sat on their annual poetry contest committee.

She was a third generation poet. Her mother and grandmother each were poets. (how rare is that in America? Three generations of women poets in the same family???!!)

While this is commendable, her work is trite and trivial. It's "safe". It's Saturday Evening Post - safe. The exact type of poetry that modern and post-modern and the Beat poets were revolting against. And the rhyme schemes? SO dull and predictable that I was bored early on in each book, I don't believe I actually read through either. Honest, not my cup of tea. I actually like TEA in my tea. Something to taste. Not simply "Isn't that nice" sentimentality. (because, of course, it isn't nice!!)

Think Woman's Club socials and after church gathering in the village green - that's what this is. Double ugh. 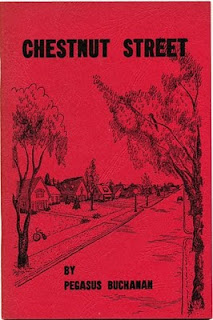