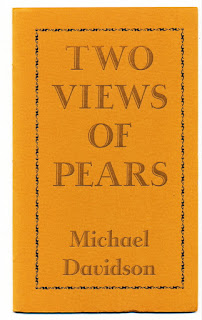 Never heard of the poet or the press before but I did a bit of research and found out that the papers of Sand Dollar are in Buffalo, NY. The man behind this press was Jack Shoemaker who is still a publisher in California. The poet, Michael Davidson, is a poet with a wikipedia page that isn't all that informative but it's there is you want to read it. He has published 8 or so books. This seems to have been his first.
Posted by stevenallenmay at 6:22 AM No comments: 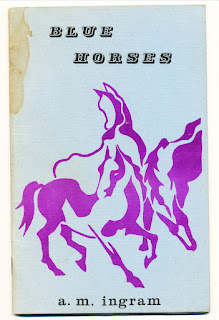 When I picked this up outside of Philly I had no idea about the author, the Press or anything. It's a bit water damaged on the cover but that's okay. I got it because it was a chapbook in a huge bookstore that didn't really display chapbooks terribly well. Few bookstores do that, actually : display chapbooks well.

Upon closer inspection though I saw that it was brought out in 1976 and typed out on an electric typewriter (am familiar with the font). Then I noticed that Cindy Bennett was created with the cover art. Cindy Bennett.... John Bennett? Yeah, a few minutes of deeper research provided me with a trove of chapbooks produced by Vagabond Press going back to 1960. Not sure if that's the same Vagabond Press but John Bennett was pivotal to the success of Vagabond. Although the Press was located in Washington State a number of Cleveland, Ohio based poets were published by Vagabond.

This is chapbook #4 and consists of short stories by Alyce Ingram who was born in 1914 in St. Paul, Minnesota. It was her first book.

Posted by stevenallenmay at 5:18 AM No comments: 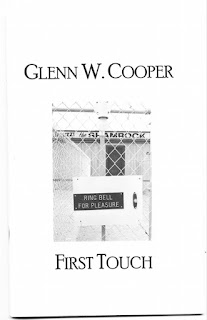 Just getting familiar with BOSP and they do some interesting work. Books in clamshell boxes. Specialized work. Famous poets (and lesser known ones) like this gent, Glenn W. Cooper. Oddly enough, I already wrote about a previous chapbook by this guy. Forgot about that one. This one is signed. One of 200 signed. I am not all that impressed with the work in this collection, sorry to say. It's difficult to separate the blogger/critic in me from the publisher in me from the poetry reader in me. Sorry, not loving this one. But I absolutely respect the work of this press and look forward to reading more of the books they publish.
Posted by stevenallenmay at 9:21 AM No comments: 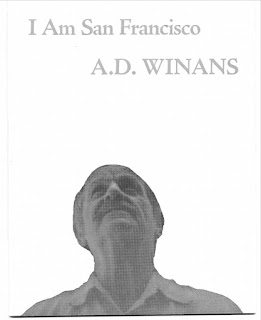 This tiny chapbook is a celebration of the life of Winans (he's still alive, just turned 80!) Handsomely done. Only 80 copies were made and all of them signed by Winans himself. Bill Roberts of Bottle of Smoke Press created this gem.
Posted by stevenallenmay at 7:11 AM No comments: 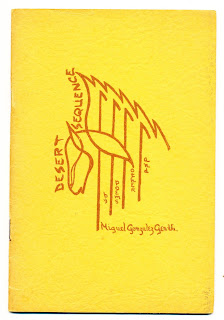 Tiniest little sliver of yellow, staple-bound chapbook. The Press seemed to publish a total of 5 books in 20 years of "operation" and most of those in the first 2 years. This chapbook was purchased in Rosemont, PA at the wonderful The Title Page. The author's bio reads like "Dr. Miguel Gonzalez-Gerth is a poet, translator, educator, and editor. He was born in Mexico City in 1926, the son of an army officer of Spanish descent and a musician mother of German descent. In 1940 he left Mexico for Texas, making the United States his permanent home. He received a B.A. from the University of Texas in 1950 and a Ph.D. from Princeton in 1973, and taught at the University of Texas in Austin for over thirty years, specializing in Hispanic literature. He has written numerous critical studies and works of poetry and has been published extensively in anthologies and magazines. He is the translator of Natural Selection (Host Publications), the collected works of Uruguayan poet Enrique Fierro."

This tiny chapbook is not mentioned in his bibliography. The author anchored in Texas, at the University of Texas, so how did this chapbook end up outside of Philly? Well, I happened across other copies of this chapbook on ABE and one was inscribed and signed by the poet to a woman with the identifier of Bryn Mawr (college) 1962. The poet had read at Bryn Mawr in 1962 and this copy had been floating about the Main Line burbs for years until I snagged it. This little chapbook has some history!

I am drawn to books about deserts as I was stationed in the California desert while in the USAF from 1975-1977. This chapbook has that feel, the coloring of the cover looks right, it's a fine little chapbook. Very happy to have it.
Posted by stevenallenmay at 7:25 AM No comments:

For Bears and Other Animals by Josie Davies (2005) 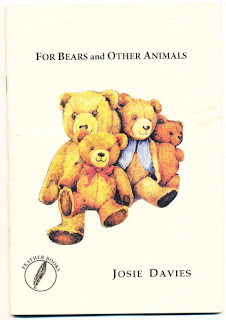 I didn't expect much based on the cover art but I found the poetry in this slender volume surprisingly good. Not every poem in this collection is a grand slam (it's Baseball season) but many of them are at least singles. The quality of the chapbook seems to improve with every page, building - as it were - to a nice crescendo at the end.

Not sure who this chapbook was geared toward but the title and cover image undervalue the work. Too bad. The work deserves a bit more.
Posted by stevenallenmay at 12:50 PM No comments: 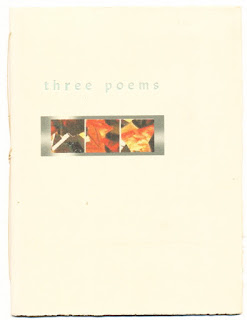 what a delicious treat : a letter-pressed, hand sewn chapbook with hand-made paper separating the two different works. And my copy signed by both authors. A gem I am keeping, for sure.
Posted by stevenallenmay at 12:50 PM 1 comment: