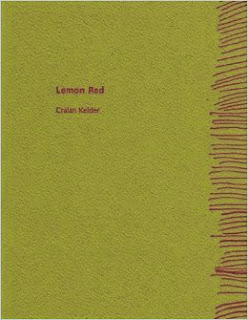 Handsome little chapbook from a charming little publisher nestled on a farm in rural Ireland. How idyllic! Coracle is the brainchild of Erica Van Horn and Simon Cutts. They have making these lovely chapbooks since the late 1990s. Brilliant! #150 of 300 printed.
Posted by stevenallenmay at 6:42 AM No comments: 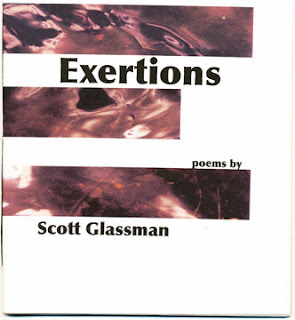 Cy Gist Press is edited by Mark Lamoureux. This is a string-bound chapbook. 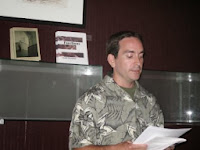 (here is Scott Glassman reading with copy of book behind him) Unpaginated. 8 3/4" by 6 7/8"(a differently sized chapbook)

The LANGUAGE in this collection is postmodernistic language to be sure but as a reader AND a publisher I often wonder if the use of "i" is the glue, the anchor word. I find it unnecessary to interject the "i" unless the poems are lifted directly from the author's diary. I doubt that's the case here but that feels like the result.
If you like his work, this is a collection for you!

Posted by stevenallenmay at 5:02 AM No comments: 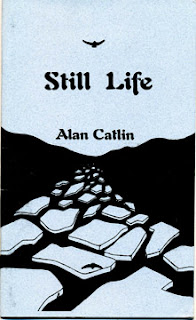 This is the first time mentioning this particular Press. Not sure if they are still in operation. Their last web(foot)print was in 2010. Small operation nonetheless. This was one of their 2007 offerings. Unpaginated.
Posted by stevenallenmay at 8:58 AM No comments: 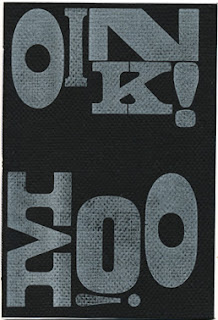 I prefer to call this chapbook "Oink! Moo!" since that's what on the front cover but this handsome letter-pressed chap is worth the reading and the finding to be sure. Patrick Riedy has done a lot of good work in a brief period of time up by Lake Erie, and he and his press deserves note.

This limited run chapbook is a great example of that. Meanwhile, Michael Basinski is quite the Every-ready Bunny in Buffalo, where he works as the Curator of the Poetry Collection at the University of Buffalo and has made contributions in both poetics and curation for several years now.

There is an even more limited run of this limited run chapbook which has flyleaves designed by Basinski and signed by both the poet and the book designer. That's my next goal !!!
Posted by stevenallenmay at 6:20 AM No comments:

Cries of Flesh and Stone by Richard O'Connell (1962) 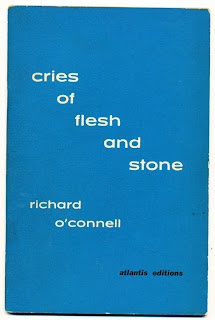 When I first discovered this little chapbook in rural Pennsylvania, I figured a lost book by an unknown poet. Little did I know.....whatever else, this small imprint, Atlantis Editions, was around for over a decade. The only name associated with the imprint was Richard O'Connell. He did publish a good deal, it does appear. All the same, by the time I moved to Philly in late 2001, his name was not known - this is the first book by the Press that I ever saw or read.

This chapbook was published in 1962. Earliest bit of small press happenings in Philly that I am aware of. Who did this poet know, where did he read? Was he part of a group? Where did they meet? (so many questions)
Posted by stevenallenmay at 4:10 PM No comments:

Blastin' Out of Abilene by Elliot Richman (1988) 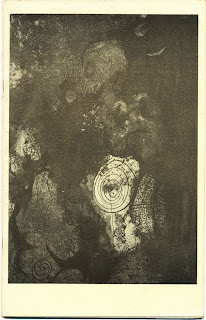 Unpaginated staple-bound chapbook. With illustrations by Bruce H. Gurly. Interesting little item. I like the illustrations better than the poetry. It happens.
Posted by stevenallenmay at 1:22 PM No comments:

one of the positives that I have gotten from this blog is the interaction with poets and publishers who I mention. It's a small field and with few and very determined individuals involved. It's rewarding to me when some of them take the time to respond. I am certain it's rewarding to them to be remembered.
Posted by stevenallenmay at 5:35 AM No comments: