No Half-Measures Here by Michelle Brooks (2003) 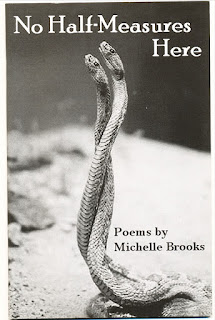 
I would add additional information about this chapbook but it's uncertain. This book was the 2003 winner of The Ledge Poetry Chapbook Award. I had to research online to find out that The Ledge is the name of a magazine that does indeed sponsor the contest and that the magazine is located in Bellport, NY but none of that information is IN the chapbook.

I digress. It's a good starting point for Ms. Brooks who has two collections published since this "tiny" as well as a novel. Everybody's got to start somewhere!
Posted by stevenallenmay at 6:54 AM No comments: 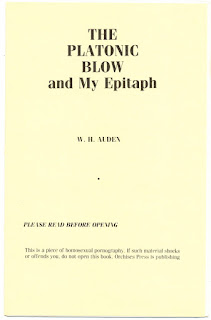 A number of years ago now I had a copy of this tiny booklet containing two poems. It was published in 1985 by Orchises Press which at the time was located in Washington, DC. The Press is now firmly located in Alexandria, VA just south as the river flows. I was taken then as now by the disclaimer on the front cover "Please Read Before Opening - This is a piece of homosexual pornography. If such material shocks or offends you, do not open this book...." and it goes on from there on the inside cover so in order to read the full explanation or apology or whatever the publisher was attempting to say, one needs to actually open the book that they were just warned against doing. Interesting. And, yes, there is porn - in words. The flashing red description of this booklet would suggest PORNOGRAPHY which in most minds would be visual and not in print. I have a book by Stanley Fisher, an obscure bit of mimeo from the 1960s that has pornographic images on the front and back cover. No attempt to hide anything there.

I said I did have - because I mailed the copy I had to a friend and figured I would never see another copy of it again. And I can happily say that I was wrong. For the Auden completist, this is worth having. Orchises has gone on to publish dozens of titles, none as thin or primitive as this one which suggests that it's early in the life of the press.
Posted by stevenallenmay at 12:20 PM No comments: 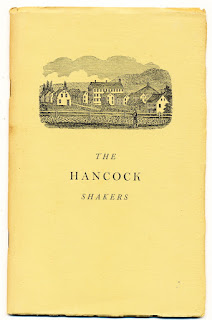 
The history of the Shakers is fascinating in the US. Shakers were more than a community of believers, they were also craftspersons of distinctive and original works of furniture and art. This 39 page booklet is in actuality the first publication of previously unpublished manuscript records including the documents "A Book of Records kept by Daniel Goodrich" and "Manuscripts found among the writings of Deacon Daniel Goodrich, Senior after his decease." Deacon Goodrich, one of the principle founders of the Hancock Society, died in March, 1807, at the age of 68.

This is a gem of a booklet and especially collectible among members of this community. It was also beautifully done.
Posted by stevenallenmay at 9:35 AM No comments: