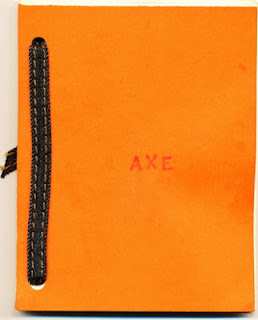 One of a kind, 6" X 4.5" hand-made, single-sided item. Not exactly a chapbook. Not exactly a booklet. Hard to define but not hard to appreciate. This item was made same year as his Trade Names chapbook which I first encountered in Philadelphia during a Ugly Duckling Presse/Loudmouth Collective event.

Similar to that book, this one uses randomized text, hand-written (sometimes smudged) on unidentical pieces of paper. Hole punched, bound by a piece of denim jeans, knotted with contact info on back. Perfectly primitive. This item is part of a long tradition of self-made books that predated the Mimeographic Revolution. Much of this "print primitivism" has been lost since many were single copies which disappeared over time.

Charles Tillman is an artist of diverse interests and completely worth following. As with many artists who cross genres and interests, sometimes the results are murky. While I don't completely understand the puzzle of words here, I greatly appreciate the effort.
Posted by stevenallenmay at 1:23 PM No comments:

All the Aldas by Daniel Kane and Gillian Kane (2002) 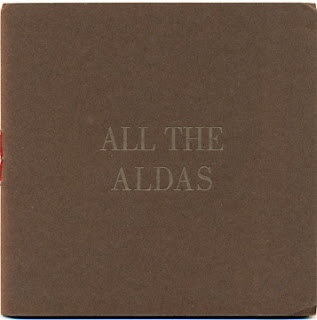 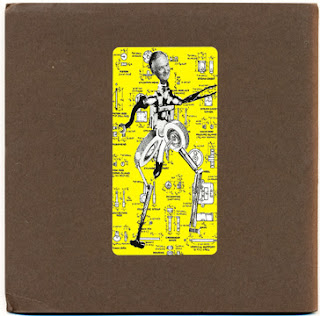 front and back covers of All the Aldas

Evil Twin Publications - unique/bizarre tag-team of Amber Gayle and Stacy Wakefield Forte - making primarily "artist" books although a quick glance on their website showed books with dogs on the cover (umm....) The one I have and wish to mention is Daniel and Gillian Kane's twisted effort called All the Aldas. Collage images throughout. Fold-out pages as well. Design difficulties not scored well by the East German judge but really a very engaging effort. Bizarre path to take but worth the time in getting there.
Posted by stevenallenmay at 3:21 PM No comments: 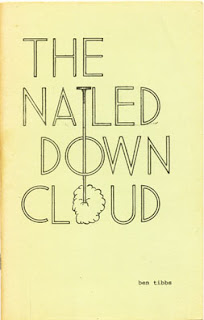 I had not heard of nor read ben tibbs before receiving this chapbook. Nor had I heard of or have found anything about this Press, Stovepipe, prior. ben tibbs seems to have been much published. This particular chapbook is not so much a collection of poems as a miscellany of one liners. I know that Mr. Tibbs is deceased and as far as I can tell the Press was a one-time blip. There is no address listed nor any other publisher information. I am here to say it exists. That's about it.
Posted by stevenallenmay at 7:23 AM No comments:

The world sometimes flows into my hands, like this little chapbook, and all I can do is write. I don't have a lot of information about the small Press out of Elyria, Ohio. I have this chapbook. I am taking the time to write about it because it's an tiny anthology worth finding. It's some talent in it that I am familiar with. Ralph LaCharity of Cincinnati. Alex Gildzen who apparently grew up in Elyria. Lyn Lifshin who hasn't met a single small press she didn't want to be published in. She is the Queen of the Small Press for a reason!

Nightballet Press has been around since 2011. So, they are newbies. But this is quite a collection so they are also talented and one needs to acknowledge Diane Borsenik who is the driving force behind the Press. She seems to be the "do-all, be-all" of the Press. But Elyria, Ohio as a publishing capital of Ohio?

Yes! I remember now! Crisis Chronicle Press! John Burroughs! They came from there. They are all over Northern Ohio and into Western Pennsylvania. Burroughs is also a force to be reckoned with/acknowledged. So this town has given birth to two small presses. How literate they are in Elyria!

If this anthology is any indication, I would wager a bright future for Nightballet!
Posted by stevenallenmay at 11:52 AM 3 comments:

must atone for a single posting in April


promise to do better

Posted by stevenallenmay at 11:08 AM No comments: