Somehow the publisher of Kamini Press found out about me and began sending me review copies of his handsome chapbooks. Kamini Press splits its time between Sweden and an island in Greece. They have been around since 2007, I believe, and have published an array of interesting British and American poets. I like the look of each one with its unique watercolor cover image. The most recent that I have received are:

for complete information about the Press go to: Kamini Press
Posted by stevenallenmay at 8:39 AM No comments: 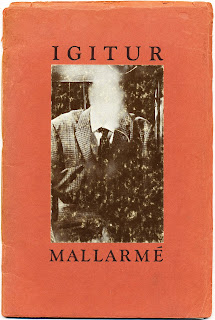 A poet-friend of mine was purging some chapbooks recently and sent me two. They sat on a pile of things I needed to read, review, catalog, post for sale: something had to be done with this pile and yet it kept growing! Anyway, these chapbooks were in the pile and I was watching a film on Netflix called “The Cool School” about the Ferus Gallery in Los Angeles and the artists shown there. The narrator mentioned an incident that took place in 1964 where the vice police arrested an artist whose work was on display at the Fergus, a Wallace Berman and – wait a minute, I thought, wait a cottonpickin’ minute – I frantically went through my pile and there it was :

Igitur
Stephane Mallarme
Translated into English by Jack Hirschman
With cover by W. Berman
Printed at the Press of the Pegacycle Lady
Los Angeles, CA
©1974

W. Berman! Wallace Berman! The father of west coast assemblage art! The bloke arrested in 1964 and found guilty! I have something with his name on it and a cover image he created! Limited edition! #343 of 500 printed! 21 pages, hand-sewn. Mallarme, Hirschman, Berman … all I need is the name of the printer and I will have a complete set!

some bio info on Jack Hirschman

some bio info on Wallace Berman

some bibliography info on The Press of the Pegacycle Lady
Posted by stevenallenmay at 12:01 PM 1 comment:

2 items picked up at Occupy Baltimore

as it happened, in the midst of the political upheaval now spreading across the country, that I was in Baltimore overnight last week at a hotel within walking distance to the Occupy Baltimore site. There I found some FREE items. I donated some cash to the cause and took :


These both represent the anonymous nature of what I like to call Kinko's publishing. Publishing done on the most cheap. Nameless, faceless, mass produced information that would otherwise be overlooked or suppressed. The fact that Gay politics is being tied to the Occupy Wall Street movement has more to do with the multiple grievances that have not been given voice since the financial collapse of 2007.

Both of the "broadsides" are reprints of previously published material. The Monique Wittig one in particular is important in that introduces a new generation of Americans to her vital work.
Posted by stevenallenmay at 3:52 PM No comments:

two versions of "The Reach" by Robie Liscomb 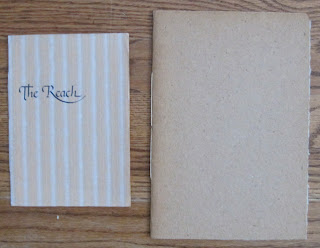 Two version of the same poem, I happened to track down Robie Liscomb over the summer and from one of our correspondence comes this description of the versions, “At first I assumed that the version of The Reach that you have is the summer 1979 printing in Japanese paper wrappers containing just the one poem. This was printed by Michael Tarachow of Pentagram Press in Markesan, WI, as a going-away present for me, as my wife and I were about to leave Chicago to live in Taiwan.

I wrote the poem on Jan. 1, 1977, in Chicago and it was first published in what I remember as the first piece published by my Fathom Press (in collaboration with Richard Lin Bodien) in spring of 1977. That little book, identified as “journal II sp 77/baolin books/fathom press” contained poems by Richard, me and Stephen Field. Actually, now that I think of it, your email probably references THIS chapbook rather than the later printing of the poem.

I got to know Richard as he was the husband of Carol Lin Bodien who has a graduate student in Indian art history at the University of Chicago, where my wife, Kathlyn, was a grad student in Chinese art history. I was starting my press and had just purchased a little Kelsey tabletop press and some type and Richard and I wanted to collaborate on a printing project. Stephen Field was a friend of Richard’s as was Sarah Burnham Mertz, whose limited-edition etching was used as the wraparound cover.

The typeface is Century Old Style, the only type I had on-hand, as it came with the press, which I bought from the daughter of a printer whose father gave it to her as a present. The text paper is something called Tweedweave that we found at a local paper supplier’s warehouse. I’m not sure whose awkward calligraphy is reproduced. All in all, I consider this to be a rather pedestrian effort, except for the etching, which I quite like.”

And that’s about all one has to say about that – seek and collect! These are incredible chapbooks!
Posted by stevenallenmay at 9:26 AM No comments: