Life is a Joke by Joe Franke 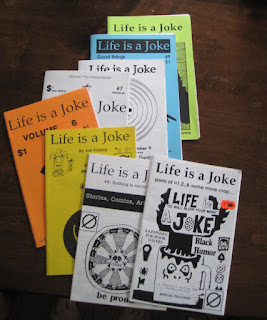 Recently I noticed a listing on ebay for some punk zines and to me that's about as cool as it gets because the entire realm of punk zines is entirely DIY and the DIY universe is extremely awesome. This cat, Joe Franke, started his zine in 1989 while living in Northern California. He was in a punk band (he still is) and he formed Axis Records. He moved from Northern California to San Francisco to Southern Maryland to Las Vegas. Now, Punks in Vegas to me is just weird but hey - he made at least 10 issues of Life is a Joke, plus other one-timers or knock-offs.

Zines, especially the work of an individual. The lay-out, the content, the name and images are all the work of one person. Twisted, illogical, awesome or scary: one person! These are the work of one person who delved in black humor. What writer of punk songs doesn't delve into black humor, I ask you? Well, Mr. Franke certainly does. Keep on keepin' on, Joe Franke. Kewl that.
Posted by stevenallenmay at 2:22 PM No comments: 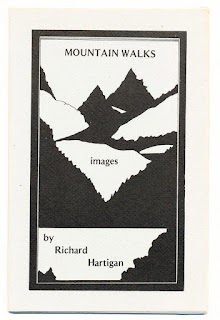 A small chapbook of images of mountain terrane with haiku-like text(poems?) on opposite page. Beautiful little book.
Posted by stevenallenmay at 3:17 PM No comments:

Dragons of Mist and Torrent by Teo Savory (1974) 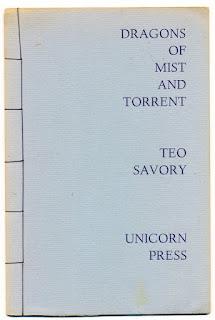 Unicorn Press has a storied past which I have to admit not being aware of until I went through a trove of chapbooks that I got last year and just am now researching. Any small press that began 60 years ago and is still going gets the tip of my hat, for certain. Al Brilliant and Teo Savory were the linchpins to this operation which began in Santa Barbara before moving to Greensboro, NC in 1972. What an incredible run of stellar work this tiny press has presented to the world! (Including work by Raymond Queneau!)

This chapbook is no exception. Japanese binding. Should be subtitled "The Canons of Hsieh Ho". Unpaginated. #278 of 450 pages (without signature). Beautiful chapbook.
Posted by stevenallenmay at 4:51 AM 1 comment: