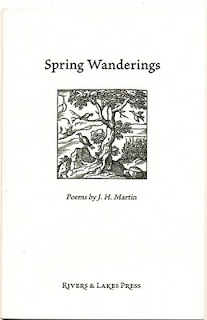 I found this book in an antique shop in rural PA about a month ago. It's a beautifully made book that by my calculations ought to be a "chapbook" but isn't. The publisher, Rivers & Lakes Press, is located in China. The book was printed there in 2009. There seems to be a website for the press but it's as vague as the material about the press and the author IN the book.

The poetry itself is beautiful and mysterious. It reflects the country that the work is about (China). The "biographic notes" about the author lend much to vague generalities and vapor trails. The "bio" ends :

"Wherever he is, whatever he is doing I wish him good luck and hope that, somehow, he may
see this slim volume one day."

Indeed so.
Posted by stevenallenmay at 10:37 AM No comments: 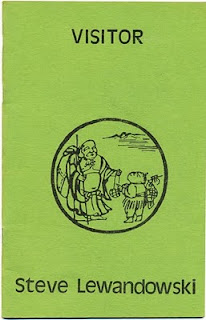 This is a thin chapbook; all of 18 pages. The cover image is echoed inside without credit. There is an image of a tree, possibly a white pine, on the back cover along with the words "white pine 8". There is little else in the collection to go on - I was able to locate White Pine Press online. The press began in 1973 and is well respected for having published poets and fiction writers of note. (Robert Bly, Neruda, James Wright)

This particular collection is an earlier chapbook of theirs. Staple-bound. Mint green cover. No info about the poet. Street address in Buffalo that likely hasn't been the Press's for over 25 years. The poetry has an air of the Asian, of mystery and sustained breathing to it. It's a pleasant change.

I contacted and heard back from Dennis Maloney, who is the publisher/editor of White Pine Press. He said that this book was published in a quantity of 150-200 copies as was the range that they published back then.
Posted by stevenallenmay at 7:37 AM 1 comment: 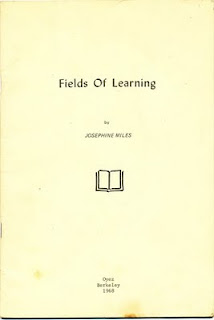 
Not enough can be said of Josephine Miles as a catalyst for the development of the "Beat Generation" as well as the San Francisco Renaissance. Her importance lay both in her own work and in her position at U Cal - Berkeley, but additionally as a mentor and sponsor for a number of younger poets who were gathering in the Bay area during the late 1950s and into the 1960s.

This small collection, 25 pages, focused on some of her experiences in academia. While not written in a "Beat style", her questioning mind and rich use of metaphor does provide linkage to the Beats. Josephine was written about in acclaimed 1996 Women of the Beat Generation by Brenda Knight.

The following is a history of Oyez Press which I took from the Thomas Dodd Research Library archives page concerning their holdings of Oyez Press books; "Robert Hawley was born in 1929 in Stockbridge, Wisconsin. He was a student at Black Mountain College in 1956, shortly before that institution closed its doors. Although he already had an M.A. in English and was an aspiring poet, Charles Olson discouraged him in this regard, but suggested to Hawley that he give publishing a try. By 1957, Hawley was in Berkeley, California, working as a bookseller specializing in Western Americana at the Holmes Book Company.

In 1964, Robert Hawley and Stevens van Strum started the Oyez Press by soliciting poems from noteworthy American poets to be published in a series of broadsides, effectively pioneering this publishing medium for poetry. This initial series consisted of ten broadsides, by such poets as William Everson (Brother Antoninus), Gary Snyder, Charles Olson, Michael McClure, and others. The first Oyez book was a collection of poetry by David Meltzer. It was during this period that Hawley began his business relationship with printer Graham Mackintosh. The Oyez poetry editions were well regarded for the simplicity and elegance of their designs. Although not all Oyez books were designed by Mackintosh, several of his designs did receive awards, including an edition of William Everson's Single Source that was selected as one of the 50 books of the year by the American Institute of Graphic Arts.

By the late 1960s, Oyez was publishing about ten books a year, even after Stevens van Strum departed the concern (around 1968), and even though Hawley continued with his day job at the Holmes Book Company. Although the print runs of Oyez books were limited at the cost of the books was kept low, the press did well so long as it had standing orders from universities and book stores with an interest in poetry and rare books. However, inventories began to mount and the cash reserves of the press began to dwindle in time. Hawley eventually turned over the distribution of the Oyez titles to Serendipity Books.

In 1978, Hawley opened his own book shop, the Ross Valley Book Company, in Albany, California (near Oakland). Even though the Oyez press continued to publish sporadically during the next few years, money troubles seriously limited the pace of Hawley's publishing projects. While a collection of poems by Samuel Charters was published in 1992, it is the only book-length project put out by Oyez since 1987. However, friends of the press have also received periodic keepsakes and pamphlets with the Oyez imprint over the years."

My own copy came from a collection that was purchased by a comics and used books dealer in San Francisco. It's a very simple chapbook, staple-bound, type-written pages as was the style of the times, and devoid of any info about the Press or the author.
Nonetheless, it's a valuable slice of late 1960s poetics.
Posted by stevenallenmay at 6:19 AM 1 comment: