A Tokyo Stroll by Herschel Silverman (2002) 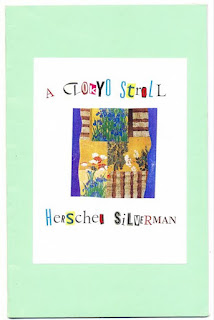 
Sometime before 2007 I had a postcard exchange that led to a packet of chapbooks arriving from NYC - based poet Steve Dalachinsky. One of the items he sent me was this tiny chapbook by Herschel Silverman. Part of the same series that produced his own chapbook which I mentioned back in 2007 (chapbook #16), the cover art was by Yuko Otomo. Since it was signed, I prompt put it in my collection without - unfortunately - another thought until today when I was reading the original article by John Clellon Holmes in which he first used the term "Beat Generation" and along the border on the first I saw this piece and said to myself "Hey, I know that name!" and then I went into my catacomb of chapbooks and found this gem.

As if often the case with talented but mostly forgotten individuals - once the spotlight has been turned off, so too does the attention. This chapbook consists of two poems: Lift Off #21: A Tokyo Stroll and Cittee Cittee Cittee #2 which first appeared in Talisman #13. The article by Levi Asher does him more justice than I could possibly and it is interesting to note that a book of his collected work does use the same title as this "little sliver of nothing". He is not forgotten.
Posted by stevenallenmay at 9:51 AM No comments: