I found another "chapbook" (hardbound book of 50 pages with a dust jacket) in a second-hand shop and decided to look it over. The poetry is journal entry level. The production is unremarkable. I have seen the name Dorrance around but never had a legitimate poetry book title nor a respected poet's name associated with or printed by this press.

Avoid books published by Dorrance (now located in Pittsburgh, PA) and this book should not have ever been published, blah! SAVE A TREE!!
Posted by stevenallenmay at 6:08 AM No comments: 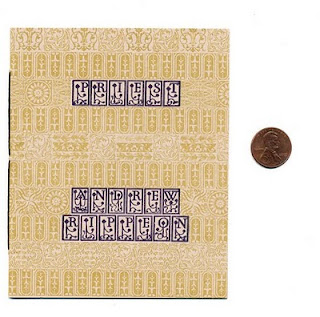 Several months ago, I found a small chapbook online called "Priest" by Andrew Rippeon. The booklet/chapbook had no other identifying features other than the image of an eye on the inside back cover with the words Viligance Society 1917-2009 beneath the image. That was it.

It's a beautifully made mystery indeed. An intentional question mark.

I was, of course, intrigued. I wrote the author, Andrew Rippeon, and he responded;

"Thanks for the contact, and I'm glad PRIEST made it into your hands.

Sad to say, I can't offer much more than you've already got on the Vigilance Society. I've been receiving their (its?) items for about two years now--little chaplets and broadsides with work by Rob Halpern, CJ Martin, Craig Dworkin, Eli
Drabman. The most recent to arrive was by David Brazil.

I get one about every 4 or 5 months, and I've noticed that the postmark always shifts (I've been interested in them for a while, too!). Some are marked on the west coast, some on the east coast, and some have been posted (or post-marked) in
places like Colorado and Nevada.

After receiving their booklets for about 18 months, I got an email--it was something like "vigilance@- or vigilance-ed@..."--asking for short work and giving me a hard deadline (10 days!), after which my response would then be ignored. I sent off the PRIEST poems, and the books I got in response are simply exquisite! (my copies posted from Seattle, by the way).

I wish I could say more, but that's about as much as I know--I'm fascinated by the press, and I've gotten used to looking for the card-sized envelopes in the mail at this point. PRIEST is 2009, to answer the only other question I can."

he also directed me elsewhere, "you might also check this post from Ron Silliman some years back:Rob Halpern, Vigilance

I'd just started reading Rob's work (Rumored Place) when I came across this post and, shortly after, received one of my very first Vigilance chaps in my mail here at Buffalo. (The poems there have since been published in Rob's excellent book,
Disaster Suites)".

I found and contacted Mr. Halpern via Facebook without much success. The mystery remains, albeit a beautiful one
Posted by stevenallenmay at 6:58 AM No comments:

The Hour by Javier Sologuren 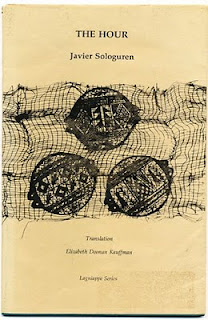 Peruvian poet and editor Javier Sologuren is widely known and published. This 33 page chapbook contains the poem “The Hour” in English and in Spanish. The cover image was created by Luis Rebaza-Soraluz. This copy is #54 of a limited publication quantity of 70. It is also signed by the author.

The only critique or observation I have is that the English translation could have benefited from spell-check. There’s a glaring “de” instead of “the” on page 8 of the English text of the poem. Minor point, but there it is.

Rare chapbook by an underappreciated poet.
Posted by stevenallenmay at 1:57 PM No comments:

What Remains by Bernadette Geyer

To his credit, R.D. Baker, the force behind Argonne House Press, has published a number of Washington DC based poets in this chapbook series. Along with several collections of his own work, it should be noted. The chapbooks are stylistically formatted and unoriginal. The concept of having photos of the poet on the cover doesn’t necessarily speak to the work within but does say something of the intent of the publisher.

This 34-page collection is visually undermined; the work is much better than the presentation. Bernadette Geyer can flat out WRITE!

And in all honesty, who hosts a poetry press on www.angelfire.com? That’s so late 1990s.
Posted by stevenallenmay at 6:08 AM No comments: 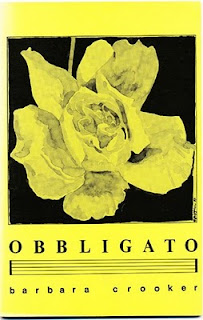 A bit of a disclaimer: I know Barbara Crooker. When I was booking poetry readings at Robin's in Philadelphia, I brought in Barbara to read back in 2002. She also served as the judge for the 2010 Plan B Press chapbook contest. We seen each other at events, I have gone to see her at readings.

This "chapbook", Obbligato, was her 6th collection. I have written in the past how fictitious it is to call a chapbook with a spine a book and yet some publishers determine that for whatever reason, that's exactly what they decide to do. Since I knew Barbara, I wrote her to get her take on this book.

When I asked what her intention as the author was for the book, she replied, "Oh, yes, it's definitely a chapbook, and was always intended to be a chapbook. It's possible the publisher wasn't aware of the difference, and/or he liked the elegance of the spine. I have quite a few chapbooks in my own collection that do have spines, for what it's worth. . . .". Indeed, the dilemma is here stated, authors are very aware of books that are outside of the form but also are very particular about what they envisioned with their work. Elsewhere Crooker wrote "but I have no idea why it has a spine (wasn't my idea, that much I do know)".

I mentioned to Barbara that there seemed to have been some issues with the lay-out, some pages where missing or mis-spaced. She was very aware of that situation as well, "Also, you might notice that the title poem has a "pasted-in" page after the first page. That's because he left page two out! I got him to fix it, I thought, but when I "inherited" the remaining copies, I found that they were all still blank. So I ran off some extra pages, and rubber-cemented them all in."

When I spoke about authors have little control over what a small press publisher might decide to do to represent the work, Barbara responded in a way that all poets who have dealt with publishers know all too well, " As for why/how anything gets done in publishing, don't ask the writers! We have no power! Sometimes, you don't know there are going to be problems until the end, when it's too late to do anything. . . ." Ain't it the truth!
Posted by stevenallenmay at 7:32 AM No comments: