Poetry Is Not a Project by Dorothea Lasky (2010) 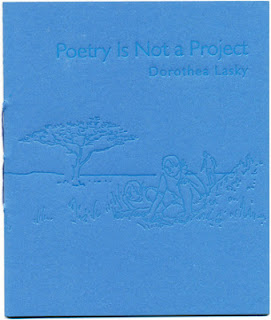 Trees were felled for these?

Trees were felled for these? Seriously?

I was sent some chapbooks that really ought to be have pulped. I will list them only to attempt to warn others:

Posted by stevenallenmay at 2:35 PM No comments: 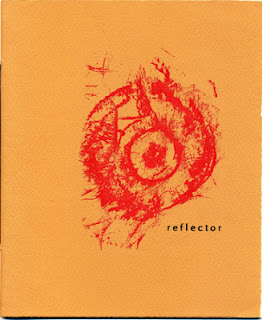 reflector is a hand-sewn chapbook by House Press. Unpaginated. A few short weeks ago I had no idea who Harrison was nor his Bronze Skull Press. That has changed. I have become familiar with Harrison, his press, and House Press (the publisher of this chapbook) since they also have published work by Michael Carr and Dana Ward. Layers upon layers, peeling back the onion skin. Learning about one press and those published by it leads to discovering others. And that leads to more discoveries as well.

Here's a voice deserving to be heard on a Press worth watching.
Posted by stevenallenmay at 6:46 AM No comments:

Strongest of the Litter by James Franco (2012) 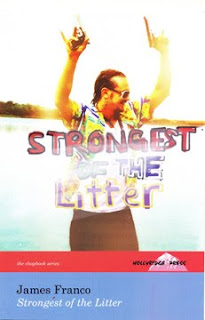 I get it: James Franco is a name. It's like a book of poetry by Jewel. Except that Franco isn't a female singer-songwriter. He's an actor (and more) but a poet? No, he isn't. This book proves that. Oh, he has an MFA from a well known college that has MFAs of worth? How nice. The "poems" in this collection are not worth the hype that the publisher had hoped his name recognition would bring forth. The poems are crap. Any publisher/editor worth their salt would have passed on this manuscript. I think it's telling that this one didn't.

The book looks exactly like every other book I have ever seen by Hollyridge Press. It's print-on-demand garbage. It's a waste of a tree. I won't speak of it again.
Posted by stevenallenmay at 7:48 AM No comments:

Maybe A Painter by Christina Fisher (2009) 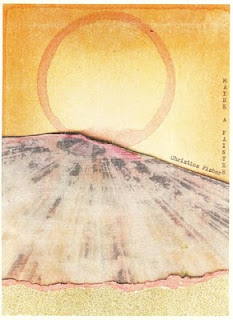 As observed by the dimensions and appearance of this book, the publisher is attempting to revive the "classic" mimeo form. It does beef up the heft of the book without providing additional work. It's alright. Heft doesn't equal depth. I do like the cover image.

Posted by stevenallenmay at 6:43 AM No comments:

.....is another person's junk. I knew this for years, but it has really come back like a steel tipped boomerang recently when a poet/friend of mine from NY state sent me a large trove of goodies, which on closer inspection didn't seem so tasty. A fair amount of it was absolute garbage and it made me wonder about the collector's etiquette. I assume this is such a thing.

Specifically, I was thinking about how it is inappropriate to throw away something just given to you (be it pamphlet, booklet, chapbook, or flier) by "an artist" within eyeshot of that person. But why would one keep the item for years before deciding to purge it particularly if one knew it was garbage from the first moment they flipped through it? Are we by nature hoarders? Do we hoard things we like to collect simply because they managed to land in our hands?

How long, once you have identified a piece of tripe for what it is, must you keep it before the eventual PURGE? Why send something you have thought of as garbage to someone you know? Do you not think they would also believe it to be shite?

For me, any chapbook or booklet that contains pages of rejection slips from magazines or journals is in itself a good indication of being complete CRAP. If others have thought so, but the author doesn't, whose judgment are we supposed to trust?

I have a motto here on this blog, SAVE A TREE, and I felt that any number of the "authors" are so arrogant that their shitty poems were more important than the life of any number of trees that they are blind to the possibility (or reality) that they were in fact terrible at what they did. Just because a person possesses the technology or ability to publish doesn't mean they ought to. But this doesn't stop someone determined to make the world love their horrid poems. It should allow for people interested in the craft of chapbooks, or collectors in general, to recycle these items as soon as humanly possible.

Posted by stevenallenmay at 1:50 PM No comments: 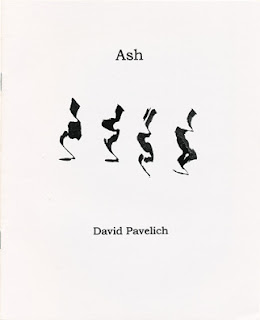 
Bronze Skull Press is the brainchild of Andrew Levy and Roberto Harrison. It hails from Harrison's hometown of Milwaukee. This particular chapbook has coverwork by Harrison. Staple-bound chapbook. Unpaginated.

Following a path of snippets (accredited), these pieces are wafer thin. More blank space than text. Almost a celebration of white emptiness.
Posted by stevenallenmay at 10:33 AM No comments: