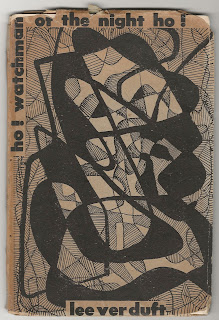 On a recent trip to Ocean City, Maryland along rt. 50 I had the pleasure of spending a good 45 minutes at Unicorn Bookshop in the small "town" of Trappe. There really isn't a town as I think of such places but a number of buildings lining the main road (rt. 50) in a mostly rural region of the state but boy - this was a bookstore to make sellers and collectors salivate. Tens of thousands, if I could guess, of books and maps and all sort of ephemera. I found 4 items (had to limit myself) and one of them was this beat up copy of ho! watchman of the night ho! which was written by someone I never heard of and published by a press I never heard of. It turns out that the Press is the one that Anais Nin ran from 1942 - 1947. Now, I knew that name and vaguely was aware that she had a press since I recall a photo of her operating a printing press while wearing heels. (can't locate the image right now)

I also had no idea who this lee ver duft was until I started researching, and was surprised to find out that he was an artist who switched from paints to words. It was only after finding out more about him that I sat down and read the poems in this collection, and to be honest, some of the phrases he used in these pieces written during 1943 were VERY pre-Beat. I was like "wow". Serious WOW. I have to read the other books that I wrote. There's some great stuff here.

The book itself is in rough shape. Unlikely to ever sell it. Only 300 copies were printed by Anais Nin's press and the 'history' of ver duft on the page I have linked here is inaccurate as it pertains to this book. They have different dates for the release of it. But it clearly states 1944 in the Gemor book I am holding. There are only 30 pages in the book but it has a spine. So it is truly a chapbook or not?

It's a great read, and that's what matters in the end.
Posted by stevenallenmay at 7:16 AM


Sewerage wiring company in Dammam, Khobar, Qatif and Al-Ahsa at the best and cheapest prices 0556959823