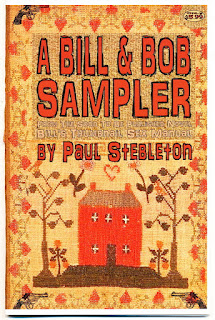 A few years ago I found online a copy of a book by some poet I never heard of, Paul Stebleton, and enjoyed the book enough to research the dude and discovered that he ran a bookstore in Traverse City, Michigan. I sent him some stuff and he sent me some stuff which included this "sampler" from his soon-to-be-published novel Bill's Thumbnail Sex Manual. I liked the cover imagery and text a good deal but only write about this now since it lay at the bottom of a heap of things in my office. Clutter mess heck and darn.

The previous book of his that I found was Bus Station Meditations which came out in 1992.
Posted by stevenallenmay at 7:15 AM